1. Place and space rhyme, each a subset of the other. January 1, 1995, in a central Illinois second-floor apartment, I start writing poems. Fall of 2004, I’m told my first book, Uncontainable Noise, will be published two states away in Ohio. Most of those poems turn inward, dive into Adrienne Rich’s wreck, map emotional history sonically. The poems in my second book, Overpass (2012), turn outward, look down, map American Bottom, my beloved rust-belt floodplain that runs along the Mississippi River across from St. Louis. It isn’t until I write “Murder on Gasoline Lake,” an essay published first in Black Warrior Review and then made into a chapbook, that American Bottom becomes my place, my Yoknapatawpha. Gasoline Lake, site of my birth home, opens spaces for me, shapes and reveals them. Place deepens.

2. I will turn 60 on Pi Day and I am writing this essay about place rendered as mappable space. Nearly half my life, I’ve lived a hundred or more miles from the Bottom, from Gasoline Lake, from Bethalto, the small, industry-free town just up off the Bottom, where we moved when I was two and spent the next twenty-two years. Neither Bethalto nor central Illinois materializes in my work much. I make my home in Urbana; I do not make my place there. Gasoline Lake is the name I give to a space-made-place that exists under the overpass, both inside and outside my head. In the only poetry workshop I’ve led, an advanced undergraduate class, I told my students they would be producing chapbooks by the end of the semester. The subject of that project would be a ten-mile stretch of road from their present or past. The road had to cross at least one county line. Or maybe I said township line.  I told them they had to research that stretch of road as it’s developed over a period of decades so they could understand and document change, so they would know the convenience store where they bought their slushies or cigarettes or both was once a field owned by the grandparents of that green-eyed kid who broke their heart in third grade and moved away or maybe, in a liquor-fueled high-school dare, was sliced in two by a freight train rumbling into the sun. I wanted them to drive that stretch of road in both directions, take pictures of buildings, of empty spaces between those buildings. I wanted them to inventory ditches and speculate changes in that inventory over decades. I wanted them to value the nonpoetic. Garin Cycholl’s first book, Blue Mound to 161, became our model and his “onslaught of commonplace” our mantra. Those chapbooks, which forced my students to rethink the page and the poem, made places of spaces. Those chapbooks produced the best poetry they wrote that semester.

3. Place rhymes with race, but you wouldn’t know it reading majority tales. I’ve been standing lately on a soapbox called Place Space Race to encourage other white writers to take on the risks involved in addressing race in the worlds they create. Years ago, while writing an encyclopedia entry about the Black Stuntmen’s Association, I asked Eddie Smith, who grew up across the Mississippi River in north St. Louis and went on to co-found the BSA in Hollywood, to name someone who did good race work in movies, someone who practiced inclusion. He named a young Clint Eastwood, who insisted on the hiring of black extras to make sure that spaces like restaurants had both black and white diners. From my soapbox I make a simple claim about a big thing: White space expands and proliferates in art at a higher rate than it does in the world. I follow with a second claim: We can do better. Toward that end, I wrote the poems in Overpass. Toward that end, I write the fictions in my Black Guy Bald Guy series, more than a dozen of them available in lit mags ranging from Spork to Diagram to The Massachusetts Review, most of them recently re-posted at my website. Toward that end, also at my website, I posted an elaboration on my Ninth Letter mini-essay “Finding Negro Lick.” Maybe you have other, more important work to do. Maybe you’re not white and you think poetry should be race-free. Maybe you think it can be. Okay. In the meantime, I’ll be out on my soapbox making claims like these. The end is worth the risk of getting called out for getting things wrong. Our roads and ditches carry our histories. Our poems can too in ways we’ve yet to imagine and articulate. World isn’t white. Our histories are raced. If we start there, we have a chance to get some things right we’ve been getting wrong. 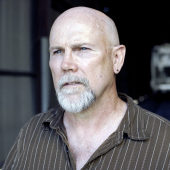 Steve Davenport is the author of two poetry collections: Overpass (2012) and Uncontainable Noise (2006). He’s received a 2011 Pushcart Prize Special Mention in Fiction and a Notable listing in Best American Essays 2007. Visit his website.