At school the day after, they had made the joke:
What kind of wood doesn’t float? They must’ve known
she was my first, the one I’d taken to prom. (Prom always
sounds too short—promenade superior—but promenade
makes me think of the Promenade Deck from “Love Boat,”
and I never want to think about boats or smiles again.)

I wouldn’t have asked her to wear what she’d worn
in Rebel, but when I picked her up, she had it all:
orange-red scarf, green sweater with sleeves rolled up,
hair prepared for 1955, those brown eyes prepared
to blink at the prospect of a curse. I had pulled open
the passenger door for her. She scoffed at the idea

of a seat belt, knowing the Chevette wasn’t cliff-bound,
knowing my lips provided sufficient protection.
When we stepped into the gym, our song came on:
As the music dies something in your eyes
calls to mind a silver screen and all its sad goodbyes.
The anchor didn’t say if she’d been found with eyes open.

Who knows if we’ll ever discover the truth, the other men
she’d kissed on location while crewmen were striking the set.
Even 30 years after I heard the news, I remain a novice.
I cringe at others’ accounts of experience, accounts
whispered in front of lockers. I still look at the scar between
my left middle knuckle and finger where I’d punched the keyhole.

Even drunk, I could say the neighbor’s dog Maria had bitten me there.
The only clue: Maria. I had figured no one would ever believe.
But now, as police look again, as they peel away the rouge,
the rainbow kimono of 1981, we use our skeleton keys, technology.
Someday we will all gather at that planetarium on the hill to look up 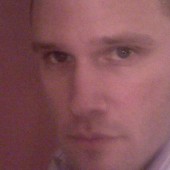 Daniel M. Shapiro is a schoolteacher who lives in Pittsburgh. He is the author of three chapbooks: The 44th-Worst Album Ever (NAP Books, forthcoming), Trading Fours (Pudding House Press, forthcoming), and Teeth Underneath (FootHills Publishing). He is the co-author of Interruptions (Pecan Grove Press), a collection of collaborations with Jessy Randall. His poems have appeared or are forthcoming in Chiron Review, Gargoyle, RHINO, Sentence, and Forklift, Ohio. His poetry website is littlemyths-dms.blogspot.com.