I was tutoring the great composer’s son and daughter, under the baleful gaze of his mother-in-law. Conversational English for her, literary for him: Blake and Keats and Milton had been suggested. I added Ginsberg into the mix, and we struggled to bring Howl home, coaxing it back from its journey into Polish. At the Akademia Muzyczna it was rumored that his new work might actually bring the government down.

They lived beyond the city, by an old plank church, its silvery cupolas coated in hoarfrost, parents always abroad, a young girl, poor relative or servant, raking leaves or burning husks in the garden, hiding in the steamy kitchen, overhearing. The boy had a watch from France, a gift from a conductor or soloist that chimed the first few sentencing bars of the A-flat Polonaise hourly. The girl had her Paddington Bear.

Moravian chocolates, Moldavian wine, herring from the Baltic, wax effigies from her mother’s  village for the Day of the Dead—she served them all, before and after lessons, Alina with her gap-tooth smile which the medieval astrologer Maturnus might read as the mark of Venus, an ardent desire for coition and prone to shed tears. Dominika with her forbidden jettes and secret cursive notebooks. Lukasz, sucking on double reeds. 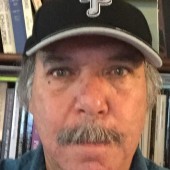