Why am I swinging? The baseball whizzes by and punches the catcher’s mitt with a leathery clap. I swing too low and too slow—strike two! The ump growls the count: oh n’ two. I’m one strike from becoming the whiff that costs the Tigers the West Merriweather County Little League Championship. I hate baseball.

I want to like it. Everybody else likes it. It’s just that I’m no good at it. And of course, it’s just my luck, here with the weight of the season on my shoulders, the worst batter on the team. I try to appear calm. I do that thing I’ve seen older players do—I step back from the plate and tap the side of my cleats with the bat. It looks cool and athletic. The sun is blinding. Everyone is squinting. Down the first baseline, off to the side where the parents are rooting for their twerps from three rows of aluminum bleachers and lawn chairs with faded neon patterns, I notice my mom and my stepmom Gale arguing. Gale’s furrowed forehead looks like wrinkled up silly putty as she jams her forefinger into Mom’s collar while Mom shakes a clenched fist. They haven’t noticed my first two strikes.

I step up to the plate and assume a batting stance: knees bent, shoulders half-crouched. Last week Coach spent an extra hour with me to improve my swing. I cock out my elbow and bring the bat back to my shoulder, just like he told me. He said I’m a slow batter, slow as molasses, that my delayed response time will end up getting me killed one day when I’m behind the wheel of a car. First, I have to survive this game. My teammates chant a cheer: we want a single, just a little single, S-I-N, G-L-E, single single single! Then they chant that they want a double. Very helpful.

I wait for the pitch. My spine is uncomfortable and awkward and my knees quiver. At the mound, the pitcher is motionless, centered in the spotlight of the sun. My teammates now want a triple: triple triple triple! The pitcher finally moves. His windup appears labored and rehearsed. I wonder what the windup does for the quality of his pitching. Probably nothing. The dainty backstep while raising his glove over his head. The curled knee and exaggerated movement. The whole production prolongs the moment when everyone is watching him. The theater of sports.

He steps through his windup, lunging forward as he throws the ball. Last week Coach said the Pros start their swing before they see the ball leave the pitcher’s hand. So I squeeze my eyes shut and pull the bat around. A sonorous ping! echoes across the field and my hands ache from the jolt of vibration. Contact! I hardly believe it! I drop the bat in a tumbling clamor and run for first base.

I sprint down the line. This is my chance. I’m the only hope for my team. I run like this is the last run of my life. My sweat-soaked uniform clings to my body. My helmet rattles atop my damp hair and bobbles. I’m a running bobble-head. The hard rubber padding inside the helmet pulls on my hair and it stings my scalp. The plastic sides clunk into my ears and jawbone. My chest aches. I’m gasping. I pass Mom and Gale right before reaching first base. They’re still arguing. They have not seen my hit. As I pass them I hear Mom call Gale a bitch. I’ll never hear the end of that one. Dad and Gale will spend months harping on this one word, bitch, and they will make sure I suffer for my mom’s mistake. The other parents cheer me on.

First base is a sullied canvas pouch of sand that I pulverize with my cleat as I turn through kicked dirt and dust to run toward second base. Maybe if I save the game for my team then we will all go celebrate. Coach will take us for pizza or ice cream and I can avoid the shameful car ride with Gale, where she will no doubt ridicule my athleticism and somehow blame me for her fray with Mom. I wish I could see my ball. I sent that sucker sailing! It’s probably at the peak of its arch, pausing at its height to take in the view before descending back down to the field.

Out past the diamond, the left fielder waits with his glove cupped open, ready to receive my pop fly. I run on, hoping he’ll botch the catch, fumble with his glove, bungle the ball, hiccup or sneeze—anything to keep me running. But the ball is predictable. It follows its trajectory and lands inside his glove.

That’s it. Championship lost. Just my luck to finally hit a ball only to have it caught and cost my team the game. I might as well have struck out. Now it’s time to see the disappointment on my teammates’ faces. Now it’s time to go home with Gale to endure lectures about Mom—or, as Dad and Gale call her, that woman. They’ll berate me for losing the game and for being my mother’s son.

I keep running. I continue to hustle the bases as if the ball was never caught. I round second base. The other teams’ fielders amble to their dugout to join arms and celebrate their victory with coaches and parents. The pitcher lifts over his shoulders a glittery trophy the size of a first grader. I ignore the new champions. I run toward third base.

The celebration overflows onto the field and obstructs the third baseline, so I’m forced to run through the edge of the huddle. I do not slow down. My elbow jabs a mother’s hipbone, my cleat stabs another kid’s cleat, my arms part a sea of limbs. I juke a neighborhood dog. Someone asks what that runner is doing—doesn’t he know the ball was caught? Hasn’t he noticed the game has ended? Poor kid.

I caused an uproar during a game at the beginning of the season when I failed to clearly touch home plate with my foot. The run was revoked after a shouting match between the coaches, parents, and umpire. Now I’m hyper-self-conscious about my foot placement when I run the bases, especially when I gallop to home plate. So I position my footfalls to make certain I stomp on the center of the plate.

I notice the plate is a pentagon resembling my kindergarten drawings of home. All it’s missing is a protruding rectangle for the chimney, and a stick figure outside. I wonder if people started calling home plate home plate because they noticed the shape resembled children’s doodles of home, or did they shape the base to match the name. What came first: the shape or the nomenclature?

I don’t want to stop.

I push off the ground. I rise above the rusted backstop, the greasy crowd and the baseball diamond. The wind snaps at my limbs in fresh wisps. Patches of dead cutgrass form pale-yellow constellations across the green field. A terrestrial Pleiades. The roofs of cars twinkle from the parking lot behind the field. Plastic bottles and old paper bags cling to the curb at the weed-grown edges of the gravel lot, and everything shrinks as I ascend the sky. From up here, the baseball game appears tiny, with the champions huddled in a celebration like a pile of plastic action figures. Mom and Gale are indiscernible. I soar over sun-washed tennis courts and pitched gabled roofs of houses and townhouses clustered alongside rows of sugar maples. A mix of every hue of brown, burgundy, black, and earthen green, form squares of housetops, lawns, chimneys, garages, cars—the pale strike of sidewalk. The posts of streetlights cast shadows on the road like a tiger’s stripes.

I cross the highway, to the honeycomb grid of subdivisions and cul-de-sacs. The occasional swimming pool offsets the pattern of lawns and rooftops delineated by fences of wood-panel and picket. I swoop down to skim the treetops to breathe the honeysuckle, only to lift up again, returning higher above buildings and tree spires. Up high, everything is calmer and still.

I stop and hover overhead when I reach the street where Dad and Gale live. All the neighbors’ homes appear the same as my Dad’s. Inside, the neighbors do the same things we do: sit on toilets, fight about toothpaste, stare at computers, scribble reminders, bicker over lukewarm dinners, while dust and hair collect in corners until swept clean.

The houses look harmless and boring. I ascend higher and higher, reaching for the huge cotton mountains in the blue, and my town shrinks into a blemish. Just one freckle among countless others speckled across Earth’s shoulder. Countless towns. Countless houses. Countless toilets and pillows and fingernail clippings. Countless thirsts and routines and small worries. They’re all so small. I wouldn’t hear them even if they hollered. 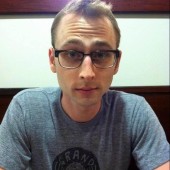 Nathan Blanchard is an MFA candidate in the creative writing program at the University of Alabama in Tuscaloosa. Hailing from DC and Baltimore, his work has appeared in District Lines and McSweeney’s Internet Tendency. He enjoys eating at Mexican restaurants with his wife.