“This is Professor Jonas,” I say, and he doffs his cap and makes a silly half-bow.

“Professor,” she says.  “Professor of what?”

He starts to respond and I, the host, interrupt.  “That’s what I call him.  He’s not an official professor of that sort; he’s just a professor by nature.”

“By nature?” she asks, and her voice is getting a tone to it, and her right eyebrow arches.

“Yes,” I say, feeling the blood rise in the back of my neck.  “Everybody is something by nature.  Everybody has a…” and I lose my train of thought, the blood filling my brain.  She’s ready to knock me off track, yet again.  The litigator.

“Then what am I by nature?” she asks me.  Professor Jonas is now gripping his hat in front of his stomach and watching.  There’s a hesitant smile on his broad face.

“Oh,” she says, obviously wounded, that tone of hers now even more cutting.

I go on, still, unable to stop.  “Yes,” I say, “but there is a softness to you.  A softness that encases all of the hard inside.  It’s like a peach pit in there.  You’re a peach.  Soft, fuzzy skin.  Hard, ridged inside pit.”

Then there is silence.  She glares at me.  I’ve clearly gone too far.  I couldn’t help it.  Or, maybe I could have.  I just didn’t want to.

I am an emotional shapeshifter.  I form around and in and to.

“Well,” the Professor says, looking to dispel the tension.  “The wormwood is nice here.  I like the décor.”  He walks in between she and I, his large belly preceding him, and runs a hand along the chair rail between the floor and the ceiling.  His hand is large, puffed.  “Who is your decorator?  It’s very cozy in here.  I should like it very much.”  We’re in our little fourth-floor two-room walk-up.

“I am,” she says, her glare still lingering on me.  Then she pulls it away.

It feels like everything could be a deal breaker.  We’re constantly dancing around it, she and I.  We live together and a land mine lives with us.  It sits in the middle of the living room, on that ugly oval-shaped braided rug.  The one the cat throws up on.  The one that makes me think of the Amish.  We’re doomed, I think, we’re doomed.

Later that night, the good Professor has made camp on the couch, his large body there like a manatee.  His eyes and the throat of his voice linger in my head like a child on the playground, tugging at someone to be noticed, to tell them what he thinks.  What do you think, little Joney?

(And he falls in love with the aide who has asked him this, despite her orthodonture problem, and that all of the kids at recess call her “snaggletooth” and that she smells, a little, of sweat and the underside of old couch cushions.)

The Prof is conked out and Gloria and I lay together in bed.  I can only see the back of her head, poking up out of the yellow comforter, and the city blares away outside.  I look at her hair.  It is a little greasy.  Sometimes it smells like chocolate that has been sitting in the sun.  There are streaks of grey in it, in the under layers, the ones that don’t get all of the hair dye.  I say, “Hey, baby.”

I get a muffled reply from her.  I can’t tell if she’s been crying, or is just stuffy-nosed; the radiator beside the bed has been clanking away and wafting brittle heat for hours.  It sometimes gives us both headaches.  She says, “For what?”

Now my feeble brain really tries to work.  I run through a few responses, and hope I land on the right one.  It’s the obvious one, and I know it, and I feel it when I say it, and wish I wasn’t saying it.  “For calling you a shrew.”

She says nothing.  I know I’ve missed the mark, and I search for it, in the gloom of the bedroom.  Things move in the air, but they’re things that are just behind my eyes; shapes like swirls, like patterned ghosts.  Since I know I’ve said the wrong thing, I think harder.  I’m not very good at this.  It’s all so elusive.  I always feel like I know the right thing to do, to say, but for some reason, the arrow shoots wide.  I shank the shot and hit somewhere in the outer rings of the bull’s-eye.  Always, it feels.

She is merciful.  She says, “That’s why you’re sorry?  Because you said that?”

“Because I said it in front of him,” I say.  I know I have just dug the hole deeper.

Still, she is merciful.  She says, just this head of dark hair on the pillow, voice muffled, reverberating a little against the bedroom wall she faces, she says, “Why would you wait to tell me something like that?  Why would you hide that?  You wait and you bring it up at the most inappropriate moment.”

I take this in.  I roll onto my back, and lace my fingers behind my head on the pillow.  I start asking myself if there is more to say now, tonight, in the bed, or if it’s polarized.  Maybe I will have to wait until tomorrow.

That’s what I think.  I wonder how to make it all better.  I think about rolling onto my side again, putting my arm around her.  She is so sweet, so frail.  So much love in her body, so much time that has fucked with it, so much time…

I can’t fall asleep.  I want things to be okay.  I get out of bed, tiptoe out of the room.  There is a spot in the unused fireplace.  It is up under the mouth of it, before the flue.  There is a ledge there.  I always feel like I am reaching up into someone’s throat when I stick my hand in there.  The throat of the building.  I find what I’m looking for.

The cat, Penelope, comes over to me as I walk from the fireplace, past the couch where the Professor is now snoring lightly, and over to my Pellomar briefcase.  I snap the latches open to the briefcase, knowing she is still awake, knowing she is hearing me move around, knowing she is wondering what I am doing.

I go into the bathroom carrying the metal pieces from my briefcase, and in the gloom, I put them together with what feels like practiced ease.  I’ve dreamt this before.

I flush, for effect, and walk out of the bathroom.

It’s dark.  I hear Penelope playing with his cat-scratcher.  Yes, we named a male cat “Penelope.”

I shoot the Professor where he lays.  Gloria comes out of the bedroom, totally freaked.  The Professor is not dead.  It must be all the fat.  I only have shot him somewhere in the middle of his body; I have no idea.  I shoot again.

There is a gurgle that comes out of him now, burbling up and out of him like a sump pump that has been just shut off, suckling its last bit of sewage.  The Prof’s body relaxes, and a fat hand flops down onto the braided rug.

I stand and look at him.  Gloria looks at him.  I hear the baby cry, but it’s not our baby.  The baby is in another room, the sound coming in through the pipes in the kitchen, and in the bathroom, a canned, hollow crying.  I turn to look at Gloria who is watching me now.  She shrugs, and I see tears glimmering in her eyes.  She appears soft to me in the adumbrations of the room, the way I knew her years ago. 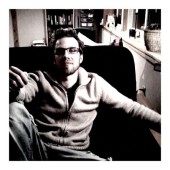 Timothy James Brearton has published short fiction with The Rusty Nail Magazine, Orange Quarterly, Enhance Magazine, and Third Rail. He currently publishes arts-related nonfiction with the Lake Champlain Weekly. He lives in the Adirondacks with his wife and two children and can be found at tjbrearton.com and breartonbooks.com.