A spiny-shelled snail that lived in the Mediterranean Sea on the coast of Phoenicia was the first source for a color called purple. During the fifteenth century B.C.E, dye-makers from the city of Tyre trapped the snails, cracked open their shells, extracted fluid from their glands, exposed the fluid to air and sunlight, and boiled it with salt in large vats. Each snail yielded a drop of dye; a single ounce required about 250,000 snails. The process produced a vibrant, long-lasting color known as Tyrian purple. Purple was precious. Purple was prized. Purple was rare. Only the wealthy could afford to wear purple.

I am drawn to purple like a hummingbird is drawn to nectar. Make that a purple-crowned wood nymph, a hummingbird that lives in Central and South America. I relish bright, bold, splashy purple as well as subtler shades: paler lavender. Pinker lilac. Redder plum. Darker eggplant. I wear purple clothes and purple nail polish. My dining room walls are purple. I decorate with purple. I accessorize with purple. A few of my purple possessions: candles, dishes, sheets, towels, picture frames, placemats, spatulas, upholstered chair, hairbrush, hair dryer, ski helmet, three purple masks, four purple rings, a painting of Seattle’s Space Needle, and a purple leather bracelet I purchased at the Georgia O’Keefe Museum, adorned with a flower that resembles the purple petunias in her paintings.

Some people who suffer from obsessive-compulsive disorder attribute magical powers to a color or colors. They believe purple, for example, will bring good luck or bad luck. They fear and shun a bad color. Or will only wear a good one. But I don’t believe purple protects me. I am fond of purple because it’s atypical, it stands out, it pops. I look good in purple. I look good near purple.

Leonardo da Vinci wrote that meditation and prayer are ten times more powerful while sitting in the violet light shining through a stained glass window. Violet and purple are not the same, although we tend to use the words interchangeably. Violet is a color on the electromagnetic spectrum with a unique wavelength of light (about 400 nanometers), one of the seven rainbow colors identified by Sir Isaac Newton. Purple is a mixture of two unique colors. It combines the warmth and energy of red with the coolness and calm of blue.

Jupiter is the purple planet. Nexium is the purple pill. The “purple orchid three” is a sweet potato. A purple state is equally divided among Democrats and Republicans. The Purple Heart is awarded to soldiers wounded in battle. Purple “Live Strong” bracelets are worn to support cancer, lupus, migraines, domestic violence. Purple prose is overwrought, elaborate, embellished, luminous language lush with alliteration and literarily lofty.

Purple is the color of royalty and luxury. The Persian king Cyrus wore a purple tunic. Byzantine Emperors wore purple robes and signed their edicts in purple. Empresses gave birth in the Purple Chamber, hence the phrase “born to the purple.” In Rome, purple was reserved for the royal; ordinary citizens caught wearing it were put to death. Later, in Elizabethan England, where Sumptuary Laws strictly regulated which colors, fabrics, and clothes could be worn by different classes of society, only close members of the royal family were permitted to wear purple. Since kings and queens were often revered as gods or descendants of them, purple symbolized holiness and spirituality. Today, from a color psychology perspective, purple is also the color of creativity, mystery, and magic.

In 1856, purple lost its exclusivity. By accident. In a lab in England, chemist William Henry Perkins tried to synthesize quinine—a malaria drug—from coal tar. He ended up with a sticky, black gunk. When he attempted to dissolve the gunk in alcohol, the liquid turned a deep purple. He patented the color. He built a factory and manufactured purple dye, the first synthetic dye of any color. Perkins grew rich. Purple became plentiful. Purple became affordable.

If purple has a touch it is a lover’s lingering hand.

When I said good-bye to the first man I loved, I wore purple. A purple knit peasant top and bell bottoms patterned in purple, plum, and gold. I was 21 and a senior in college. He’d just graduated and was moving to Israel to study at a seminary and become a Rabbi. We’d known each other for just three months. He had, as he said, resisted the obvious temptation to get deeply involved. I had not. I felt desolate and despondent. I feared I would never see him again. Never feel such love again. He kissed me deeply. He slipped his hand under my purple top. He caressed my breasts. “Don’t cry,” he said, “or I’ll leave right now.” I held back my tears. When he left I cried and cried and cried.

If purple has a touch it is a lover’s lingering hand.

Painter Paul Klee was a member of the Bauhaus school. He wrote about color theory. He lectured about color theory. He painted with intense colors. “Color possesses me,” he said. “I don’t have to pursue it. It will possess me always, I know it.” I scroll through photos of Klee’s works, some of which I’ve viewed in museums. “Hermitage” especially captivates me. In this 1918 painting, I see simple, childlike figures—yellow, orange, black, grey—afloat on a brilliant, vibrant purple background—very pleasing to my purple-tuned eyes.

Have you ever seen a purple frog? (I’ve seen a red frog, but never a purple one.) Discovered in 2003 in the mountains of India’s Western Ghats, this amphibian, also known as the pig-nosed frog, is an endangered species. According to nationalgeographic.com, purple frogs spend most of the year underground, using their short, stout limbs like spades to dig as deep as twelve feet. During monsoon season they crawl upward to mate; but they seduce females from below. Hovering beneath a thin layer of dirt near the entrance of narrow tunnels, the frogs contract their muscles and inflate and deflate their vocal sacs, making sounds in short, rapid, repeating pulses, music that appeals to potential purple partners.

My friend Renee Adsitt is an architectural color consultant. She helps her clients select paint for the interiors and exteriors of their homes. “People rarely choose purple. They’re prejudiced against it,” she says. “They think Barney purple or Crayola purple or six-year-old-tennis-shoe purple. They don’t picture the nuances that are possible with purple.”

If purple has a taste, it is a kiss from wine-wet lips.

I got married at the French Laundry Restaurant in Napa Valley where rows and rows of purple grapes grow. Our invitations were printed in purple ink and mailed in purple envelopes. My matron of honor, my friend Bonnie, wore a lavender dress. After my husband-to-be and I read our vows and were officially joined in matrimony, our guests released balloons—silver, pink, and purple.

If purple has a taste, it is a kiss from wine-wet lips.

Remember mood rings—the 1970s jewelry fad? Women, especially, wore them to monitor their emotions. When the ring’s stone turned a particular color, it supposedly signaled that the person wearing it felt calm or happy or nervous or stressed, or, in the case of purple, romantic, amorous, sensual, passionate. Here’s how mood rings work: The stone is not a real jewel, but a glass shell or hollow piece of quartz containing thermotropic (the tendency to move toward or away from heat) liquid crystals under a protective coating. As skin temperature changes, the crystals change position or twist which alters the wavelengths of light they reflect or absorb. At 82 degrees Fahrenheit, the typical skin surface temperature, the ring is blue or green. As skin temperature rises, the ring turns purple. Perhaps because you’re feeling flush with lust. Or maybe you just have a fever.

Pop icon Prince wore purple costumes and encouraged his fans to wear purple clothes to his concerts. “Purple Rain,” from his 1984 album of the same name, is one of his best known songs. What did he mean when he wrote “I only wanted to see you underneath the purple rain”? Here’s what Prince said: “When there’s blood in the sky—red and blue=purple. . .purple pertains to the end of the world and being with the one you love and letting your faith/god guide you through the purple rain.”

In 1967, Jimi Hendrix first performed “Purple Haze.” In interviews, he gave varied explanations of his lyrics. He said the song was inspired by the “Night of Light,” a novel by Philip Jose Farmer. He said it was about a dream: he was walking under the sea, a purple haze surrounded and engulfed him and he got lost. His faith in Jesus saved him. He said the song was about the way he felt when he was falling in love with a girl. Hendrix denied his lyrics were about drugs. I suspect many of his fans who listened to his music while staring at strobe lights and black light posters thought otherwise.

In 2013, I gathered with six of my high school friends for our annual girls’ getaway, this time in Sedona, Arizona, a city known for the spiritual and mystical: vortexes, healing, meditation, yoga. We bounced and bumped on a jeep ride through red rock mountains. We rode horses at the M Diamond Ranch. We sat silently in The Chapel of the Holy Cross. On our last night together, we lounged on the patio of our rental house, sipped cocktails, and gazed at the sunset, at the watercolor sky painted coral, tangerine, mauve, lavender. As the sun lowered, the sky turned indigo and the mountains turned purple, then black.

In Alice Walker’s acclaimed novel “The Color Purple,” purple symbolizes rebirth and awakening as Celie overcomes abuse and oppression and learns to express her thoughts and feelings. Celie’s friend and companion Shug Avery tells her, “I think God is pissed off if you walk by the color purple in a field somewhere and don’t notice it.”

As for me, I can’t help but notice the power of purple everywhere. 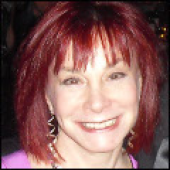 Sharon Goldberg lives in the Seattle area and was once an advertising copywriter. Her work has appeared or is forthcoming in The Gettysburg Review, New Letters, The Louisville Review, Cold Mountain Review, Under the Sun, Chicago Quarterly Review, The Antigonish Review, Gold Man Review, three fiction anthologies, and elsewhere. Sharon was the second place winner of the 2012 On the Premises Humor Contest and Fiction Attic Press's 2013 Flash in the Attic Contest. She is an avid but cautious skier and enthusiastic world traveler.