Maria rises in red from bedclothes already squared, but she still pulls the sheets. Only the dust spreads from her sleep. She won’t look into her mirror and she won’t see the prints there, the fingers not her own. Drops of rain against the window pane remind her of the hours she spent in her tonic and gin. How the ice melted to rim after rim. He was not the man drenched at the door. His shoes, the polished ones, were not pressed in fried-jelly under his booth floor. He didn’t loosen his tie or hide his sweat beneath a collared, dark shirt. Maria ordered another gin for each of Harvey’s men, not him, that night.

Outside the sun-skinned boys on bicycles ride down Redfern Avenue with playing cards in their spokes. Their shoelaces stale from mother eyes with crusted fictions; some adventures only boy-men can pretend. Spiraling downhill, The Ace of Spades smashes ants and spits rocks. Not far behind, Blue Bike pedals The Queen of Hearts. She bends and tears from Blue Bike’s back tire. The Queen folds into the cracks of Redfern’s sidewalk. At the bottom of the hill, Two of Diamonds shuffles his feet. He waits for his friends behind Harvey’s parking lot.

The morning ritual is Maria’s sober companion. She scuffles down the hall, barefooted, because her slippers are too small. She fingers the tangles behind her left ear, scratches the mole in the crook of her arm. She won’t see the dirt climbing the carpet in the footprints behind her; the footfalls of others cannot see her own. Every morning, Maria dreads her breakfast alone.

The Ace of Spades leads in the trail through the woods until he reaches the spot.

“Then, touch it!” Spades mocks.

Slices of toast gray in Maria’s kitchen. The swish-swash in the dustpan, wet sounds on linoleum, windows cracking open: all background noise to Maria’s morning, not her own. She cooks breakfast on her stove. Thick coats of butter cover her skillet. Peppers in green and yellow, sharp cheddar, mushrooms, and onions cover the fork scrapes in the one cast-iron she owns. While she eats, she checks her Love-Phone: The King of Hearts is searching for his Queen. There’s no picture, but he says he recognizes her from the bar scene. 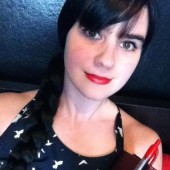 Janae Green studies Creative Writing at Washington State University. Her work has appeared in print, regularly, with coffee stains. She hates the smell and won't drink it, but its okay as an ice cream or yogurt.