Questions Raised By Monsters: A Review of The Next Monsters by Julie Doxsee The questions raised and sometimes answered by Julie Doxsee in her collection of prose poetry The Next Monsters range from simple to profound and back again. Using lyrical language and subverting something as straightforward as the titles and arrangement of her pieces allow Doxsee to offer the reader room to think, pause, and react. Whether or not the reader comes away with anything approaching a definitive answer is up to the reader; Doxsee creates space for them to come to their own conclusions.

Sectioned into six mini-collections of poems, the book doesn’t read at a leisurely pace so much as at a methodical tempo. Her first prose poem “Lightning” introduces several of Doxsee’s strengths: her command of language; the vividness of her descriptions; and her invitation to see beyond the images she places upon the page. The poetic “I” and readerly “you” appear immediately, beginning the conversation that continues throughout. The action as well begins in this section: “I capsize the urn and cover myself in a soot suit, feel something ugly disappear, then scream when a handprint appears on the hip.” The intense imagery and engaging metaphors continue with “holy dogs in orange tissue encircled by torches” and the “accidental sonic artifact of nobody’s museum.” This first section establishes the dialogue and asks the book’s important questions: who and where are the monsters?

These questions remain satisfyingly unanswered for the first portion of the collection. Animals appear throughout, as images, as participants, as messages, but nothing approaching monstrosities. They display “[beastliness]…a beast wrenching the lovers apart and wrenching the holy dogs from the temple” but nothing in their action or character speaks to the hideous or the dangerous. The reader may begin to wonder where the monsters are.

The third section “The Last Monsters” begins to answer this question. By the time the reader encounters “In My” the beasts appearing on the page have been consistently less monstrous than the humans throughout. Here we “see a horrible cab driver” and “people in love with identity” – two examples of small monstrosities that build to the “awful public domestic dispute” that Doxsee “[needed] to reinvent” and which leaves the reader facing unanswered questions. These instances of terror towards other living creatures embody the truly disturbing threads running throughout the book. A “man boils cocoons he slips his naked hand in to pull the silk from private little worm homes, wombs” and we recoil. Another man – or perhaps the same one – “roasts a sausage over the towering flame” and we shudder.

Doxsee is confronted by that which she cannot quite articulate; she “can’t shake the image…can’t shake the full moon. It is the permanent, not the fleeting, that hurts” – the lack of answers becomes a strength, and she reassures us we don’t need the rote responses.

Doxsee’s concern seems to be less with answering her own questions and more with the daily injustices and cruelties one human shows another and her language serves the purpose by leaving meaning open and drawing the reader’s eye to the signs of violence:

I show you my side matter-of-factly as it bleeds on the tar. Stagnant clouds rush forth at every holy siren, then dissipate on the gravelly surface as water comes. This is how we leave the plant: more fragrant when bruised, more bruised when pressed by permanent thumbs.

She balances the violence with beauty and lyricism – “You became a dog. I became a frog. You became a lizard and passed me on the rock” – but the questions remain and we are okay with this. The investigation into differences between beasts and monsters continues but any potential answers remain elusive and illusory. “Can you think of the opposite of this? I say with my blacked-out mouth. Lost waterfall you say, shapeless.”

The questions of explication and elucidation permeate the book, rising again and again to challenge both poet and reader into naming that which cannot be named. The process takes its toll on Doxsee:

I thunder through you. I thunder my brain out. Do you know the equation of asthma, of objects I press? I press your heart between two panes, some of it leaks out the glass….Your ears satellite the wharf for clues, shadows.

Doxsee approaches an answer when she allows her words more time and space in which to operate. Her power grows as the books nears its conclusion. In the last section she declares “In The Shadow I Am Nothing” and the poetry agrees. In the poem of the same name she comes close to making something approaching a declaration when she asks can “a 4000-page poem throw a mirror at the percentage of darkness we lose in a week of pink sunups?”

Doxesee connects her work to the larger conversation of the poet’s role as a voice. Her lyrical strength and ease with the prosodic form allows her poetic voice a free rein that might not otherwise appear in a more traditional poetic arrangement. She shows in her short and powerful poems that no, we do not need an excess of poetry in order to approach an understanding of our world, each other, and ourselves: “The way I think of a place on your hip or lip saves me and saves me and when I feel like an empty hotel, still I am saved and saved and saved.” 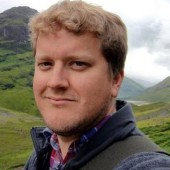 Travis Klempan began writing poetry and fiction while serving in the Navy. His works have appeared in The Report at O-Dark-Thirty and Line of Advance, Volume 2. He is currently pursuing his MFA in Writing & Poetics at the Jack Kerouac School at Naropa University in Boulder, Colorado.