When Simon was six, he asked his mother if every cyclops was a windmill. His mother stopped reading from the Puffin Classics edition of Don Quixote and answered, “I’m sure some are billboards and telephone poles.” A subtext of deflation slipped into Simon’s frontal lobe and took root until the green of the boy’s eyes could transform sunlight into an acronym: ATP (Arriving Thermal Photons). And so when Simon was called on by his friends to assist them in subduing a thirty-foot tall shaggy octopus, he was of little help, for all he saw was a weeping willow. And when his younger sister asked him to kiss an enchanted princess, he felt obliged to break the news that she was holding a captive frog striped with lipstick.

As Simon matured, his favorite adverb became “really.” He grew to view literature as a pair of spectacles, useful for correcting larger-than-life astigmatisms. Individuals suffering from illusions of grandeur were to be prescribed Macbeth or Madame Bovary or The Great Gatsby and sent on their leery way.

Simon became a CPA. He enjoyed numbers. Their transparency. How six minus four was equal to two, and how this equation was true not only in Simon’s native Ohio but in China, Ancient Babylon, the Sea of Tranquility, and the Andromeda Galaxy.

The equation was also true in Santa Fe, where—at the age of thirty five—Simon encountered a knight errant.

Simon was on business for a routine audit and was walking off his lunch, admiring the local fauna and flora—roadrunners and cacti—when he found himself opposite an angular old man on horseback, wearing a ragged linen tunic, knee breeches, and a porcelain salad bowl on his head. A Bowie knife was strapped to the old man’s left boot. Simon looked around. The dirt road was empty, minus himself and the mysterious rider. The horse was emaciated, its fur pockmarked with bald spots. As for the rider, his face was dominated by facial hair: a gray handlebar mustache and a goatee.

The old man smiled like a child mid-recess. “It speaks?!”

The old man squinted. “Who do you belong to?”

Simon was taken aback. He paused to consider the question. As he did so, there was a scream in the distance. It sounded human. It was a rabbit.

“I suppose I belong to Cohen and Company,” said Simon. “At least, they pay the bills.” He forced a laugh.

The horse snorted. The old man dismounted, steadying the bowl on his head. He took hold of Simon’s left arm and began spinning it, the way a physical therapist tests a patient’s rotator cuff. Satisfied with the examination, he dropped Simon’s arm and asked, “Where does the energy go?”

Simon backpedaled. “Look, I think there’s been some kind of—”

The old man laughed. “Do you even know what you are?!”

Simon bit his tongue. He was growing annoyed. “Of course I do. I’m…” but no words followed. What a peculiar question, Simon thought. I’m the son of John and Hazel Munroe. I’m an Assistant Controller at the 6th Street branch of Cohen and Company. I’m— A Confucian, a Daoist, and a Legalist walk into a bar. The Confucian orders a Manhattan. The bartender nods approvingly and says, “classic.” The Daoist doesn’t order anything; he just waits to see what the bartender will pour him. The Legalist orders a bottle of Heineken. The bartender says they have Heineken on tap, but the Legalist prefers his drinks sealed.

The three philosophers get down to business. They’ve gathered to decide—once and for all—which is the superior philosophy.

The Daoist wonders if all chemists agree that it’s “noble” for a gas to be stingy with its electrons.

“The point,” says the Confucian, “is that people take scientists seriously.”

“You don’t think people take us seriously?” says the Legalist.

“Stop me if you’ve heard this one,” says the Daoist. “Descartes walks into a bar and orders a drink. When Descartes finishes his drink, the bartender asks if he wants a refill. Descartes replies, ‘I think not,’ and ceases to exist.”

The Confucian sips his Manhattan and reminds the Legalist that no one even knows what a Legalist is, and that the world has completely forgotten that sixteen hundred years before Machiavelli was born, the philosophy of ruthless expediency was systematized and perfected in China, and the result was the unification of twenty million people.

The Legalist sneers. “So, what’s the plan? We decide—right here, right now—which is the superior philosophy, and then we walk out of this bar and show the world a united front?”

The Confucian nods. He thinks to himself: When the wind blows, the grass will bend. My words are wind… His plan is simple. He will quote from reputable sources and persuade his listeners of the superiority of the cultivated life, a life which is cut, ground, and polished and which shines with unmistakable sagacity and propriety.

The Legalist has a different plan. As the Confucian extols the virtues of ritual and filial piety, the Legalist takes out a small vial of liquid nightshade and surreptitiously pours a few drops into the beverages of the other two philosophers. He thinks to himself: Poison speaks louder than words…

The Daoist has no plan.

When the Confucian finishes his speech, the Legalist lifts up his Heineken and proposes a toast: “Let the best philosophy win!”

Out of respect, the Confucian raises his glass.

The Daoist raises his ice water.

Each of the philosophers prepares to drink. The liquid is inches away from their lips when the Daoist suddenly says, “Stop me if you’ve heard this one… A butterfly, a moth, and a locust drift into a bar—”

And just like that, a butterfly, a moth, and a locust drift into the bar and land on a nearby bar stool.

“Wait,” says the Confucian, “are you telling a joke or doing play-by-play?”

“This is getting absurd,” says the Legalist. “Let’s finish our toast—”

The butterfly, the moth, and the locust circle the bartender and land on the rim of the Confucian’s Manhattan. The butterfly makes a faint clicking sound that ends in a lilt. The moth and the locust appear to clap their antennae in approval.

“What are they saying?” asks the Confucian.

“I think it was the punchline,” says the Daoist.

The Legalist rolls his eyes. “If that was the punchline, we’d cease to ex—” 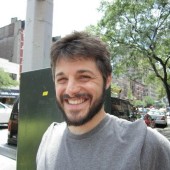 Andrew Gretes is the author of How to Dispose of Dead Elephants (Sandstone Press, 2014). His fiction has appeared in Witness, The Pinch, SmokeLong Quarterly, and other journals. Currently, he is a doctoral student in the Center for Writers at the University of Southern Mississippi. His website is http://andrewgretes.com/