her skin soaked in booze

and cured with cigarette smoke,

her husband shaking in a blue suit,

trying to remember me, too.

There was cousin Rayme, lying

in the cheap brown coffin, his face

His death was so ridiculous, no one knew

how to roll it up and eat it. The thump

of his head off slick ice. Drunk. He

woke up dead.  In a collage of pictures

there’s one of a teenage Rayme lounging

in a lawn chair, a can

of Budweiser in his hand. He looked

as happy as I ever saw anyone.

The best things about

some of our lives is

drinking beer in a nylon chair.

Me and Rayme once broke into

looking for a snub-nosed pistol

that was rumored stuffed in his mattress.

Unc was getting his feet sawed off

Rayme was simply older. Together

because of Nanny’s funeral. That might’ve been

the last time I saw him.

Rayme wanted to sell the gun.

The man we called Cousin It.

He loved my father and used to

in the sun porch door on random mornings

even though our house was

well off his ride home from the bakery.

one of those guys you shake your head at.

Just another juicer from East Pittsburgh.

A man in a flannel shirt. My cousin Rayme,

who watched football at the Serbian Club

with a bunch of men who didn’t love him

but stuffed themselves into the only suits they owned

to see him lay there in a funeral home

under the Westinghouse Bridge

while the whole world passed by over-head. 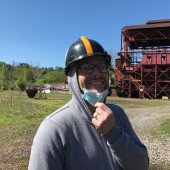 Bob Pajich spent the last decade-plus as a professional reporter and even longer than that as an idiot poet. His book of poems, Trolleyman has just been released by Low Ghost Press.