If there’s anything that a poem is, it is a calling back to what came before, and we don’t need to fully admit everything Eliot claims in “Tradition and the Individual Talent” to see in the history of poetry that the poem is always and already in conversation with what precedes it, and the moment we label it poetry, we are forcing the poem into communion. In turn, the more a poem observes tradition, the closer it is in contact with its predecessors. In English, this is perhaps never clearer than with the sonnet, whose rich history and wide variation has been inexhumably rooted in the tradition of the form itself—the very word “sonnet” will invoke Shakespeare for most readers. This phenomenon is as true for an irregularly metered fourteen-line poem as for an exceedingly faithful one that adheres to all the formal constraints of a sonnet. By classifying a poem this way, we oblige comparisons with all the sonnets written before and after, we invite considerations of how this poem treats the subject of love, and, much of the time, we suggest it should be appraised as either a failure or a success.

T. Zachery Cotler’s Sonnets to the Humans (Ahsahta Press, 2013) establishes a peculiar and rich frame to contextualize its poems, and so demands we be especially conscious of how we read it against or alongside the tradition. On the one hand, the book attempts to communicate with history, but while also laying claim to “Outsider” status. It makes moves that challenge our ability to call each poem a success or a failure, and yet lays bare a desire to be a collection of sonnets. It bucks constraints, does violence to language, and yet still approaches the traditional subject matter of love.

The organization of the book itself gives some hints as to how it manages so many seemingly contrary elements at once, without falling into paradox. The book consists of seven groups of seven sonnets, each group introduced by a piece of prose. The very first prose piece sets up the frame, and establishes what will make the reading of the poems that follow into a unique experience:

“Vishvamitra, a fictional poet who lived in the 21st century, began to hear a pattern and record it on sheets of paper.

The pattern mimicked human lyric speech. It was, Vishvamitra decided,

testimony of a sensual non-human, one who suffers because, and despite that, like angels, it doesn’t exist.”

From the first sentence, we are presented with a proxy for the poet-himself in the figure of Vishvamitra, who echoes an older tradition of the poet-as-vessel, channeling an external voice, acting as a kind of mystic scribe rather than a wordsmith. And what does Vishvamitra transcribe? A pattern, which imitates human speech, not being human itself. The prose goes on to say “the pattern seemed to hear or see rhyme where there should be none,” and to explain the introduction of “nonce words, like ‘eroende,’” so as to prepare us for what follows. And so, before we reach the first sonnet, we learn that the poems are examples of mimesis, seeking to imitate and to be in conversation with “human lyric speech.” And yet the source is non-human, outside of corporal existence. As such, we are prepared for an approximation of form and an alien take on tradition.

The first flight of sonnets meets, in this sense, our expectations. We find no rhyme or meter in the manner that we normally look for in a sonnet, even if countless other sonneteers have already eschewed those conventions. The first poem begins “If there is only you, / how could I tell, but, from a cancelled mecca,” and just as we have been prepped for the nonce and the foreign, we are assured here that the individual line, or even the individual poem, doesn’t need to be read for meaning in the traditional sense. This isn’t to suggest that it is impossible to glean meaning from the poems, but rather the meanings to be found are far from stable. If we don’t understand that right away, it becomes clear when the poem ends with “I came a long / time ago again to tell / you eroende.” The opening prose has suggested “eroende” has something of the essence of “‘eros,’ ‘duende,’ an ‘end’ to love?” but the suggestion remains ephemeral; “eroende” operates like dark matter in the poem, we know it’s there but we can’t really see it.

Where the poems resist literal interpretation, they offer striking images and language puzzles. The images, themselves, recall tilt-shift manipulations in contemporary photography, with points in the images flashing clear before tumbling steeply, and deliberately, out of focus:

past each station empty of you, you burned

of your science, your myrmidons

The stuff that makes up the images is composite and varied, from the “myrmidons” imported from epic poetry that we see above, to a “Normandy invasion” which arrives just the page prior. Collisions of the unlikely are frequent, such as when we find the meeting of the Red Sea and Big Blue. And when the images are evocative, they are especially so: “A boy fell in halves / from the f-holes and opened / and closed his fists in the road.”

As for the language puzzles, they come in many forms, from the accumulation of more nonce words the further we progress (“Éurno is nostalgia, / she told him, for what did not occur”), to the substitution of foreign pronouns, like “Æ”—the “ash”—in the place of the first person “I.” This latter case is particularly interesting, as it arrives after the halfway point in the book, but with the suggestion that it has been there all along: “Vishvamitra began to hear a difference in the pronouns. Had it been sometimes not ‘I’ but ‘Æ’ (pronounced like the ‘ae’ in Israel) from the beginning? Something like fifth person…” From this point on, the transcriptions include the Æ, but we’re also invited to go backwards in the book and see where Vishvamitra might have been mistaken before, to look for more instances of this “other” pronoun. This is not the only time when we are invited, by Vishvamitra’s doubt, to reconsider earlier poems:

“If there is only you…” Vishvamitra determined this made, retroactively, first person pronouns indeterminate, referring possibly to no one: “no one brought blank water…” “no one fell halfway…”

We are, in a sense, being asked to not just to read the book again, but to read retrospectively. And in this sense, if not only, Sonnets to the Humans is as backwards-looking as any other collection of sonnets. It is a curious thing, though, to realize how the book instigates this turn in an almost physical sense, and to recognize that this is what makes the non-human pattern being transcribed come closest in its mimesis of “human lyric speech”: being “backwards-looking” is not pejorative, but quintessentially human, particularly in poetry.

But then, in the last prose piece, the pattern ceases. The last section of sonnets, accordingly, moves deeper and deeper into pieces of “language” that have accrued throughout the book, and which resist all attempts at literal/concrete interpretation. The final poem has a smattering of connective words and an otherwise indecipherable collection of nonce, ending, naturally, on “eroende”:

In one sense, the mimesis machine breaks down, and though we can still find a kind of volta resting on the turn of the “but,” we have run out of similarities with the human. As such, an interesting point about this book becomes clear: the farther we read, the more possibilities for reading open up in retrospect, and yet when we reach the conclusion, it comes to a hard close. It invites us, more than ever, to look backward, both within the text and in general. For this reason, the bid for an external, outsider, alien voice, acts as a mechanism that only reinforces the book’s relationship to what comes before. After all, even the unintelligible, as we find it in the last poem, is still poetry, and as such demands that we consider it with the tradition. Though it resists such a determination, this machine that breaks down is still very much a success, and a human one. 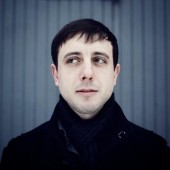 Jeremy Allan Hawkins is an alumnus of the US Fulbright Program. His work has appeared in Harvard Review, Tin House, and Ninth Letter, among other journals. Currently, he lives, writes, and studies in France.