Reason Number 4,900,012 Why Brittany Everette Smith Has to Die The very first thing I ever hated about Brittany Everette Smith was this purple purse she used to carry with her to kindergarten. It had glitter woven into the strap and a velvet-lined interior and a little pot of bubble-gum flavored lip gloss inside.

Brittany Everette Smith used to tell us she could fly. She said she took these flying sessions at night while the rest of us slept and that the rule was she could only go if her mother closed her bedroom door all the way after kissing her good-night. Then, she slipped out her window like Wendy from Peter Pan.

Her mother was Annie Smith. Once, at a neighborhood get-together, Annie Smith announced to the world that my father sold used cars, with a little too much emphasis on the word used. It was one of those get-togethers where all the mothers cooked things they’d found on Pinterest and all the fathers put their hands in their pockets and shrugged, as if they didn’t even know what social media was. As if they’d never even sent an e-mail or anything. As if they didn’t, these dads, go to my Facebook page at two o’clock in the morning and “like” my prom pictures and my spring break pictures and the pictures of me trying hats on at the weird old hat store downtown. Like they didn’t comment, “I think I recognize that pier!” then take their comment away, delete, a minute later. These daddies who believed in their own invisibility, who didn’t know I’d already seen what they’d said. That they had been at their computers in the dark calling me “cute,” then changing their minds.

Brittany’s mother used to let her take mental health days when we were in high school. Sometimes, after school, on my way to scoop ice cream at Lucky’s, I passed by Benjamin Loughton’s, this pricey clothing store downtown. Benjamin Loughton’s thinks it’s some kind of fancy boutique, and even though this isn’t Rodeo Drive or anything, they have fancy sofas in there and thick carpet and they even serve white wine to the customers. I caught them that way, Brittany Everette Smith and her mother on the oyster-colored sofa. Sitting inside this boutique with a superiority complex. A boutique that doesn’t know where it lives. Mrs. Smith had a glass of wine in one hand and was fiddling with her hair with the other, leaning back on that sofa, laughing at something the sales girl was saying while Brittany looked on, smiling, too. She turned her head and saw me through the window, me in my pink-striped Lucky’s apron, rushing to my after-school job. Brittany Everette Smith kept smiling, smiling.

She claimed she peaked into our windows at night. This was during her flying years. She saw if we sucked our thumbs while we slept or if we had a blanky or stuffed animal or anything like that. She said we all snored. She said she went to the top of the school and just sat there on the roof counting stars until she got sleepy. She said she could fly super super fast, when she wanted to. Rocket-fast, she said. Zoom. She said she could turn flips in the air, better than any of us could do in the pool, and I started to point out to her that of course she could turn more flips in the air, where you didn’t have to hold your breath, but we were already in middle school by the time I thought of saying this. And there was already Graham Wintonbrow in Mrs. Turston’s sixth grade homeroom. He had moved here from Michigan, but he had blonde hair and blue eyes and something of a suntan, so we all called him California Boy. He hung his head at that one. You guys, he said. We hardly ever got a new kid, especially one from as far away as Michigan.

He and Brittany Everette Smith passed notes in class, where they weren’t allowed to have their phones with them. They texted at night.

We became best friends, somehow. Ours was the kind of friendship girls who have known each other since kindergarten have, full of affection and fear. Like everything else, our friendship was tinged with self-loathing. We kept telling each other, no, you aren’t fat. And yes, that boy likes you.

I wondered if my father, who was still selling cars when I got engaged to my Timothy, ever looked up pictures of Brittany at two in the morning.

Graham Wintonbrow was number hundred or something. Or hundred thousand. And Timothy, years later, ranked in the millions.

We told everyone we’d been best friends since we were five even though everyone had known us all this time and they knew it wasn’t true.

Timothy Aaron Ragsdale was the most beautiful boy I’d ever seen. One afternoon, after class, he came into my ice-cream shop, ordered a double scoop of snow cream ice cream, and I looked up at him and heard a little bell go off inside my head. I felt so swimmy and dumb I could barely speak.

Timothy Aaron Ragsdale was not the first boy I ever loved. But he was the first boy I ever loved like this. He was the first boy I ever wanted to possess completely and not just to show him off or because he had enough money to make it so I could quit my job at Lucky’s, and that was when we were just dating, before he got down on one knee in my parents’ back yard, the smells from the get-to-know-your-serious-boyfriend-cookout still lingering in the quickly cooling night air. He asked me to marry him, but what I wanted to do was climb onto his back and clasp my hands around his neck and rest my head on his shoulder and never let go. I wanted to let him carry me around like that forever.

So it doesn’t really surprise me or anything, the photo you’ve e-mailed me. Brittany Everette Smith kissing my husband on our wedding day. My maid of honor and the love of my life, lips locked. The two of them, behind a brick wall inside the gargantuan flower garden by the old stately house. Our September wedding. Gardenias. You can choose white gardenias for a September wedding.

I should post the picture on Facebook, and I’ll tag them both. I’ll say, Reason Number 4,900,012 why Brittany Everette Smith has to die.

I wonder how I’ll do it. I could slip into my daddy’s car lot, take any of them out for a spin, mow her down on her morning run. We’re best friends; I know her route.

There are things I could add to her Manhattan. Poisons to try. Or, I could go old-school and just shoot the bitch. An easy trade at the pawn shop: my engagement ring for a gun.

Or, I could do a little late night flying of my own. Push open her bedroom window from the outside; she still lives with her parents, I know the place well. Or, maybe, having flown there, I could undo myself, molecule by molecule, and seep in through the tiniest cracks in the wall. I could float, a noxious vapor, and drift in through her nose, her mouth, her ears. I could be the poisonous gas that burns her eyes, that whispers into the deepest folds of her brain. Into her dreaming mind, I will inject myself. I will begin with reason number one and proceed, through the night, through my list, and, in this way, it will be my hatred, undiminished and pure, that moves through her, stopping her heart. 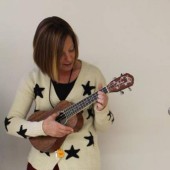 Susan Woodring is the author of the novel, Goliath (St. Martin’s Press, 2012) and the short story collection, Springtime on Mars (Press 53). Her short fiction has appeared in The Cupboard, Passages North, turnrow, Literary Mama, and Surreal South, among other anthologies and literary magazines. Her short fiction was shortlisted for Best American Non-Required Reading 2008 and Best American Short Stories 2010.