Here we are, sitting, our legs dangling off the edge of my bed, along the precipice of things to come.

“Are you going to miss me while I’m gone?” I ask softly. Hearing myself say this, I realize I must sound like a little girl. A vulnerable child, looking to be reassured. I want to appear strong, but after last night I know it’s too late for that. No words could mask the hurt registered all over my bare, solemn face. It feels thick and dirty, laden with dried salt and the crud from last night’s remaining make-up.

“More than you know,” he says.

“What am I going to do while we’re apart?” My words take on a pleading tone. My gaze is fixed on the floor. I don’t know if it’s mental exhaustion or embarrassment, but I can’t bring myself to meet his eyes.

He takes his hand and puts it under my chin to lift my face to his. “Write me a letter.” I look into his eyes. Those gray eyes that reel me into his world and further away from my own, every time.

“Okay,” I say with a faint smile. And for the next month, this is all I have to hold on to.

I lay awake in bed, restless, staring at the ceiling. The old glow-in-the-dark stars I taped on my ceiling ages ago have held up. I should feel comforted being back at my parents’ house, but I’m not. Everything reminds me of that naïve little girl. The same hopeful, ambitious college graduate that moved to New York City. The girl I no longer know or resemble. My body may be in Seattle, but it’s a hollow hell and a ghost for company. My mind is still wandering New York City, sifting through memories I can’t forget. I reach my hand over to the nightstand, feeling for the stereo remote control. I hit the ‘Play’ button, unknowing of what old cd I’d left in the player. The last time I heard this song was with him in my apartment. We were lying down in bed facing each other when this song triggered his memory.

“This song reminds me of my best friend who’s using…” he said as his voice trailed off.

“Have you talked to him lately?” I asked.

“No. He texted me the first week I got into rehab, but I didn’t get to see his text until after I got out.” He dropped his head to bury his face in the pillow, heavy with agony, as if hiding his face would enable him to hide from all the things in his world he couldn’t confront.

“He said he needed help and asked me what methadone program I was on.” His words sounded muffled but the pain from his voice still carried through and fell heavy on my chest. My heart.

“Have you tried getting in touch with him since then?” I sympathetically asked.

“You can try calling him now, can’t you?” I said, trying to sound hopeful.

He turned his head to face me then said, “No. It was just a moment of desperation. I know how it is.” He began to slide his legs up to his chest, curling into fetal position. “The last time I saw him, he was smoking crack while his friend was shooting up next to him.”

I was struggling to find the right words to console him though I knew there were none. I gently whispered, “I’m sorry,” as I moved my body closer to his and reached my arms around his torso. He said nothing, only embraced my body in return. I lay there, trying to cradle him with warmth.

Looking back now, I can’t remember if I slept that night; all I can recall are all the times he has since relapsed, so many times I can’t count anymore. I stopped pleading with him because all my caring and misunderstood efforts were in vain. They only led to defeated arguments with his cold rope of words lashed out across my face. I can remember more nights crying myself to sleep as I would stare at his gaunt body passed out next to mine.

I decide to write him a letter. I force my body out of bed, sit behind my desk, turn on my lamp, pen in hand and begin to write. Maybe then he’ll understand.

Here’s a story or two.

My mom. When I was in middle school, she saw the cuts
on my arm one day. Long sleeves were my second skin, but I had
just gotten out of the shower and I was wearing nothing but a towel
wrapped around my body. We were looking through her closet
together and as I was reaching for some shirt, I was completely
oblivious to the fact that every cut, red and raw against the pale
backdrop of my skin, was exposed for her to see. It wasn’t until she
uttered with concern and shock, What happened to your arm?!,
that I instantaneously retracted my arm with the recognition that
she saw every self-inflicted overlapping mark of hopelessness,
manifested into the cutting board I made of my arm. Each cut red
and raw, surrounded by pink skin, swollen with all the emotion I
couldn’t express.

Nothing, I angrily mumbled back. She said nothing more,
nor did I, and the days and weeks following went on as they
usually did. All that changed was the sudden absence of my shaver
from the bathroom. Because in her world, scissors and knives
didn’t exist.

When I was in college, I fractured my femur. The morning
I would learn this, when she was driving me to the doctor, she
asked, How did you hurt your leg?

After three months of her helping me around on crutches,
she finally said, I think you drink too much. Still, when I would
come home at 3am barfing and dry heaving over the toilet, she
would heat up soup and leave it out on the kitchen table for me.

The next morning she would always ask, Did you have fun last
night? And would say nothing more.

I always told myself I’m never going to be like her in all
her dysfunction respects, but now I’m crying in utter
disappointment and disgust at myself, at the parallels I realize exist
between her and I. I can finally understand that it was her own
backwards way of trying to protect me without pushing me away,
while still loving and caring for me. Just as I have for you, in the
only way I was ever shown how to.

I can’t stand by and watch you hurt yourself anymore. It’s
unbearable. I’m not judging you and I never did. Not even when I
met you, not even when there was a desk between us.

I stop writing as the memory of meeting him replays in my mind. The first time his tall, lean figure appeared in my office doorway. Back in a time and place where I felt optimism in being a methadone maintenance counselor.

He appeared so calm and cool then, so together, that it almost felt deceiving. I met his gaze and tried to study what story was behind those weary gray eyes. I wish I knew how to fix him—how to fix myself. But I didn’t know then and I don’t know now, so I open my drawer to reach for that familiar sharp edge. I look down at my wrist and see all the blue currents beneath the skin’s delicate surface—all the currents flooding my heart with every shade blue. I take the blade and glide it across my soft skin, feeling it soothe away those connections to my heart. My head starts to feel so faint and too heavy that I can no longer manage to make sense of anything as I rest my face down on the desk. I let the pen fall out of my grasp just as the knife in my other hand slips to the floor. I’m beginning to feel dizzy, though I can vaguely make out the silhouettes I see escaping my very being. Oozing red elephants flowing steadily from the veins in my wrist. All the elephants I’ve tried to tame and suppress are now roaming freely. Illuminated by moonlight, they look so serene, growing in size and hue, saturating my letter with the deepest color red and sealing it with my blood. My eyelids feel heavy and heavier until I no longer have the energy to keep them open. I am able to drift off to sleep, no longer tormented by these elephant memories I’ve finally released. 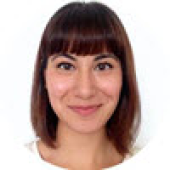 Gyaltsen F. Go graduated from University of Washington with a B.A. in Psychology, and concentration in English and Sociology. Shortly thereafter, she relocated to NYC and has worked as a Substance Abuse Counselor. Though her roots are in Seattle, she currently lives in Brooklyn with her tabby (and tubby) cat, Sir Walter Elliot. She's really good at eating, but has decided to foster her creative writing pursuits instead. "Red Elephants" is her first publication. You can contact her at gyaltsenfgo@gmail.com.