Our buzzcuts grow past our shoulder blades, and mud crusts our jeans. In the woods, Jon and I fight our army games, stabbing at each other with pointy sticks, tromping on our marches through dry sumac vines and creepers. We crisscross the creeks like commandos. And then we nap on moss-covered logs, scratching at old chigger bites, picking at the scabs. Jon throws rocks from the bank and kerplunks the stream’s cold water.

Sometimes we climb into the cracked shell of our drained swimming pool. Inside its leaf-filled cavity where waterlogged piles are half-slimy, half-frozen, we pretend we’re superheroes of the ocean. We battle the concrete cavern as it swallows us like a make-believe whale, but we always lose to the sea creature. The triumphant monster carries us far away into some deep ocean where fish don’t have eyes. Jon sobs sometimes.

Since two Junes ago, we don’t go to baseball anymore—or even to school.

That summer day, our older sister, Lira, swam alone in the once-full pool. We begged her to come have a catch.

She blinked through chlorine, her eyelashes speckled with water, and then she squinted and took a deep breath, kicking off the wall into her first lap of butterflies, burnished hair flashing like a school of minnows in her wake.

We left Lira there, walked away to the cul-de-sac to throw our game of pickle. As we tossed the baseball, we told each other stories. Though, really, no story was ever as good as our sister’s. And we liked her crude jokes the best. Our favorite? If we swallowed bubble gum, we’d fart balloons.

Lira made us laugh.

That long day, we waited for her to arrive at the end of the street, but she never came. The sun was hot; we shifted our play, followed the shade’s cool movement along the pavement and sidewalks. We pitched our ball until most of the light had disappeared.

After dusk, we came home to find our sister drifting through the red-colored pool like a wet cocoon.

Though the investigators didn’t know why, Lira dove into the shallow end—something she’d always been told not to do. She smacked her head, broke her neck. After that, for most of the afternoon, while we were clueless and throwing a ball, Lira had bled and drifted face-down in the cool water while the skimmer grabbed at her long strands, pulled her to and fro as it slow-motion twined and ribboned her body with her lovely hair.

Now, since the accident, our family moves like we’re aiming at corners.

After the funeral, Mom drove away in the old station wagon, and we haven’t seen her since. Dad has quick-sanded into himself. He wears soft shoes and shuffles across the hard floors upstairs, and we try not to bother him. Jon and I tiptoe to avoid squeaky spots through the corridors. All our sounds vanish into slammed closets. The quiet drifts in our house graceful as a boat, seaworthy, rotatable, but not overturned. Apparitions of possibilities haunt the stairs, traveling down, not up.

Dad talked at dinner once, though: I wish we lived in some kind of house where, in each room, we’d find Lira living at a different age. Your mother would’ve liked that. He lowered his reddened face, planted his forehead on his empty plate, and said nothing more. His bare scalp shone in the dim light. Jon whimpered. I sat immobile like a stone at the bottom of a lake.

And so, we imagine Lira still living in our big house, someday growing old here. In the pink room, she’s a grinning prom queen; in the wood-paneled library, she wears a diamond on her third finger; in the wallpapered attic room, tinted yellow from the curtainless light, she brags about her five children. Long hair even longer, more golden. Small waist smaller. Droopy eyelids like Mom’s.

But we don’t play in these rooms because Dad has taken to locking them. We aren’t allowed to visit those closed spaces or look for our dusty ghosts, and we don’t understand the thumping we hear when we kneel and listen for motion under the doors. But we think there’s laughing. And the trickling sound of water.

A fog helmet lowers over the house on these cold days. The light splits during winter storms, trees knocking salutes. Dad sits at Mom’s vanity, waits for some specter behind his mirror reflection, tells us he gets visitors sometimes. We’ve never met them.

He goes to thrift stores during the day, collects discarded china and cups emblazoned with people’s names. He alphabetizes his stash, and when he opens the kitchen cupboards, we read names like “Abbie” and “The Nussbaums” and “Ricky’s 30th Birthday!” He has no room to store food on the shelves—the strangers’ plates and cups have even moved into the living room and entryway.

We aren’t sure Dad knows we’re here. Every night, after I tell Jon to pray, after we tuck in, after I pull my greasy sheets to my chin, we hear Dad’s tip-toe scuffle across the floorboards in the hallway. The sounds thud from far off as if he were at the bottom of the ocean in the belly of a whale. His skeleton keys rattle on a ring, and then he jiggles the handle of each locked door, then swings them open one by one, whispering goodnight to someone we cannot see. 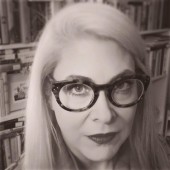