His walk down the driveway hurts.

I’m up early this morning to do in

some red squirrels tapping and scratching in my attic.

another year moles and woodchucks.  So many

or hunt down or kill, and they always come back.

When I see him later the old gentleman

with the golf swing and unfashionably long car

his bladder and sixty pounds.  For him heaven would be

my days are numbered.  Later in the morning I try

to savor a good long one for him but don’t quite.

Above the commode, through a window still decorated

with a holiday wreath, I see his less determined walk.

How small he seems, as if spied through the wrong end

of a telescope.  Finches nested on the window ledge

are raising their grotesque young.  They fling shit

from the nest against the window.  I watch and wonder

if it’s the same finches year after year, as they must

wonder if it’s the same guy pissing year after year.

I give in to the miserable things because they sing,

because I love them and soon they will fly away. 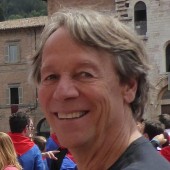