The revolutions come once a year, usually in the spring, with angry citizens pouring into the central square of our once-beautiful capital city, raising their fists and toppling statues. The best and brightest tanks are called in to restore order. They encircle the square, turrets twisting in slow arcs like curious old people sniffing the wind. Always, there will be a photograph published of a young man performing gymnastics on the tank gun. Someone will peer into the tank gun’s snout, hoping for a glimpse of the Elite Guard reported to be inside. For a while, there are celebrations. New flags are waved. Chants roll like drums through the crowd. Pockets of intensity flare where the foreign media set up cameras. Stages are built. Bands play. While speakers line up for a turn at the mike, babies are born and opposition leaders return from exile. New dances take shape over the footprints of past revolutions. Before long, there is a struggle between those who favor velvet gloves and those who favor rolling heads. Harmony turns to mistrust and mistrust to violence. A scuffle erupts and a shot that might have been a firecracker. The revolution scuttles toward its end with the help of the Elite Guard.

Of the Elite Guard, some say they are no longer humans in the usual sense and are coated with metal, the same layers of bulletproof armor that protect the tanks. Some say the Guard have no faces, that they do not think or feel and have been reprogrammed by computers or torture to act mechanically in the interests of the government or as instruments of their tanks. Some say the Guard are young boys who have not yet learned to feel, or have too soon forgotten. Some say the Guard is a myth and that the tanks have no one inside. The debate is resolved only by agreement that the insides of tanks is a useless topic of discussion. The tanks are black boxes of artificial intelligence, we say, and their inner workings impossible to understand, however many young men peer down one’s snout or skitter under another’s smooth, hard underbelly.

And yet, from a distance, the tanks’ behavior can be predicted with a degree of accuracy. You can feel the moment coming, not long after the fireworks, or the gunshots, or the expanding scuffles. You can stand on a hill outside the city or look through the window of a tall hotel not far from the square and feel the moment’s approach in your chest. Time ticks hard through your veins. The air dries in your throat. Individual sounds clamor into one sound, and the one sound is like a call to the tanks. Who can say whether or not the tanks receive orders from the government or take cues from the protestors? Only the tanks’ behavior is certain; its incitements are beyond us.

From up close, the tanks don’t act as a single force. One will jerk forward, crushing a woman slipping flowers into its treads. Another will fire .50 caliber rounds through the body of the swinging gymnast. Others will hold their positions, in the short view giving protestors the impression there’s still hope. In the long view, the tanks’ procession is inevitable. It’s how our revolutions work: first, a few tanks inflict spotty damage; next, a promenade crushes bodies in the square. As other tanks join in, the .50 calibers flicker like precise fireworks in the night. The tanks’ motors are the steady growls of lions loping after easy prey. Before long, the makeshift structures of the revolution are splintered like toys. The tanks plow rivers of silence through the screams. Bodies split open and reveal their fragile inner workings, confessing their weaknesses under the treads. Some protestors risk their own lives to carry off the injured and the dead. Others, recently mugging for the cameras, hide their faces and run. Always, one international reporter will be injured or killed. Foreign relations will be tense in the short-run.

The square is cleared before sunrise. For a time, the tanks idle in a group, surrounded by bodies and blood. Something will remain standing that no one could have expected. A food stall with hanging meats. A microphone stand. A portable toilet.

Bulldozers come and push the revolution’s remains into a pile. The pile is burned. The tanks turn and depart.

Smoke tendrils up from the empty square, and those in sniffing distance must close their windows against the smell.

Who will be first to walk through the new square? Someone must. In this case, a man with an old gray hat and ill-fitting clothes. He takes a few steps with his hands in his pockets. Looks around. Takes more steps. Scratches himself. He seems to be chewing something. Who can tell what’s driving him? He cuts through one corner of the square and eventually zig-zags to the center. At one time, there was a fountain at the center where birds and people congregated, throwing things in and taking things out. Some of that fountain’s tiles still remain, their hand-painted images of doves and flowers now dirty with footprints, black stains, tracks. Still, it’s evident that people danced here. They had a revolution. They let themselves think they could predict the inner workings of tanks. For a time, everything felt new. They forgave themselves and each other for old misdeeds. They soaked the land in crazy optimism.

The man stands on their footprints and wonders how they could have let themselves think this. He wonders what they had inside them that could prompt them to stare down the black tunnel of a tank barrel, knowing it would explode in their faces.

He places a shoe on one of their tracks, his other shoe on another, and makes his way across the rest of the square in a kind of dance. A step forward and two to the side. But now there is no music, and the choreography reveals nothing. 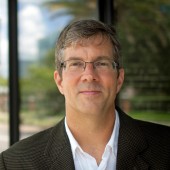 John Fleming's stories have appeared in McSweeney's Quarterly Concern, The North American Review, Mississippi Review, Fourteen Hills, and Carve, among others. He is the author of The Legend of the Barefoot Mailman, a novel, and Fearsome Creatures of Florida, a literary bestiary. He teaches creative writing at the University of South Florida and is the founder and advisory editor for Saw Palm: florida literature and art. He blogs at johnhenryfleming.com.