I was fourteen the first time I saw a curveball. It was a 2-2 count and the guy made me look like a golfer swinging at the dirt. On the walk back to the dugout, I kicked at the empty husks of sunflower seeds and kept thinking it wasn’t fair. My aluminum bat was tapered but straight. The ball should move in a straight line too.

I sat on the warm metal bench and put my left hand in the sweaty leather of my glove to stop it from shaking. I bent the curved brim of my hat a few times and then put it on low and slouched down on the bench. After that strikeout, I fell into a slump and ended up batting ninth the rest of the season.

That was the summer I did anything with a girl that wasn’t just kissing. Her name was Alyssa, and her parents had a house with a golf course in the backyard. Her tongue was pink but didn’t taste like bubblegum. We used to walk around the water hazards at night and scare the little frogs out of their hiding spots on the bank. They would croak and dart into the water as soon as they heard our footfalls. We would lay down on the greens and stare at Orion and the Big Dipper. I would point out other groups of stars and claim they were Leo or Taurus, and she seemed to buy it. She would talk about her little brother who had autism, and I would complain about the guys on the team.

After the curveball but before I got moved to the bottom of the order, we were making out next to the bunker on the twelfth hole. She sat up and took her shirt off. It was grey and made of a sort-of see-through cotton. Her bra was white with a tiny pink bow between the two cups. I put my hands on them and eased her on to the ground. She arched her back, slipped a hand beneath, and unhooked her bra for me. I slid it off her skinny arms and set it on the well-manicured grass.

It was everything I thought I wanted, but I didn’t know what to do. I had heard plenty of talk in the dugout and wanted my own story to tell. I broke away from her kiss and started to suck on her nipples. It was fun for about three seconds, and then I thought, what now? I couldn’t think of anything else to do, so I just kept sucking. After a minute, she cleared her throat. I looked up at her and she just stared down at me like a cat watching a dog from a tree. She rose to a sitting position, slipped her bra back on, and got up. I walked her back to her parents’ house and waited on the curb for my parents to pick me up. By the time the headlights from my mom’s ‘89 Minivan flashed onto the side of her house, I knew Alyssa was done with me.

Fourteen was a hill: the familiar parabola of a fly ball, the aching curve of a girlfriend’s breasts. That curveball and the awkward foreplay—they seemed the same. There were rules the world was supposed to follow, and I’d been lied to about physics and sex. 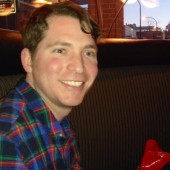 Jacob Euteneuer lives in Akron, OH with his wife and two sons. He is a candidate in the Northeast Ohio MFA and Editor-in-Chief of Rubbertop Review. He writes book reviews for Barn Owl Review. His stories and poems have appeared in Booth, Hobart, and Jersey Devil Press among others.