Calla sometimes came home from work at the hospital feeling odd, wanting release. The incubator heat lamps in neo-natal care relentlessly cooked those peaked babies in the unfair truth of life. It made Calla want to fight with Antonio. Tell me you might leave. Disrupt us. She used a nasty lilt in her voice when he did something irritating, like forgetting to lock the front door.

“Do you want us murdered in our sleep?”

Antonio was always sitting at his drawing table, sketching designs. The dishcloth was always slouched on the kitchen floor.

“This towel sure is heavy,” Calla would goad. “I can see why it was too difficult to put back on the hook.”

The words were certainly hers, but owned by some inner demon, and she felt like a jerk, which generated some guilt and other reflections about her shortcomings. But the cycle just stoked a fire inside her and the heat felt nice.

Effortlessly patient, Antonio would have none of it. He never screamed back when she taunted, although his hand might pause in the middle of a sweeping, graceful line on the heavy drawing paper. He sunk his energy into the elaborate, baroque flourishes for the custom Rest in Peace artwork that he sold on decals—the kind mourning family members and friends carefully stuck onto the back windows of their pick-up trucks and four-door sedans.

Calla and Antonio were both soaked in the work of sadness. Perhaps that was the reason they had been drawn together in the first place.

“How many more do you have tonight?” Calla demanded, as she came up behind him. Antonio was inking the silhouettes of small black birds in a spiky circular pattern around the lettering:

“Just this one,” he said, not turning towards her.

She felt invisible when he worked.

The quotes Antonio used for the decals were mostly from Native American Prayers for the dead—one with the universe type of sentiments. People seemed to like it. Calla glanced at a completed page at the top of the table:

“Right. But not the actor. Different guy, obviously.”

“Probably for the best he’s gone. Now he doesn’t have to spend the rest of his life dealing with the confusion.”

Antonio didn’t seem to find any humor in it, which churned her up.

“He was pretty young. Did he kill himself? You know, to end the comparisons?”

“I really don’t know. Not the sort of thing I ask.”

Was he a little ruffled? Maybe she was getting somewhere. She returned to the circle of birds Antonio was still drawing for Maria Jones and picked at him again.

“The beaks look too long.”

“They’re hummingbirds. Did you know you can tell the age of a hummingbird by the width of its beak?”

This ornithological knowledge caught her off guard and she genuinely asked, “So are these young or elderly birds?”

“Oh hell I don’t know,” he laughed. “I have to draw them so tiny that the beaks are all pretty thin, like needles. I suppose these should be adults, mothers maybe, for Maria?” Antonio grabbed Calla’s hand, gave the top of it a little peck. A small release.

Calla flopped onto the couch and stared at the beige popcorn ceiling, and suddenly thought of painting it sky blue. She remembered something.

“When I was little I saw one in the yard once, hovering over my mother’s azalea bush. I thought he might belong to Rumpelstiltskin—that this little bird spun all of the magical golden straw.”

“I love your imagination,” he said.

Antonio didn’t say anything about how hummingbird couples don’t nest together, how the females are left alone to build a home and tend babies, because he would never leave Calla alone to do that. Calla knew about the delicacy of life all too well, so he also didn’t tell her that if you hold a hummingbird you must not touch the tiny bone that divides its breast in two or it may go into cardiac arrest.

Instead he wanted to share a fact of their fortitude, because hope is a gift. He told Calla this: “When some hummingbirds migrate, they cross the Gulf of Mexico.”

And Antonio began to draw more quickly, less carefully, and the hummingbirds grew larger and populated the paper until they covered over Maria Jones’ epitaph and flew into one another, crashing at the edges of the drawing pad.

“For two weeks, their wings thrum at near-invisible speeds, over the white caps, while the moon rises until the sun tugs it down, over and over again.”

The figures on the paper furiously rattled the desk and as Antonio finished filling in their growing bodies, they burst forth and darted through the apartment, surrounding him and Calla together in a fabulous, flapping disruption. 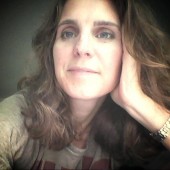