Santa Claus and the Red Shoes At night he stayed at a homeless shelter one block north of the old bank building where I worked. During the day, he drifted around the neighborhood, heavy as a rain cloud, with his bushy white hair and big gray sneakers.

I was an Americorps/VISTA volunteer at a community development corporation on the near-west side of Cleveland in 1998. Gentrification had taken a peek at the neighborhood, cleared its throat and looked away, hoping it wasn’t seen. The CDC had tried throughout the 1990s to duplicate the urban renaissances of sister neighborhoods like artsy Tremont, home of celebrity chef Michael Symon’s Lola Bistro; and Ohio City, home of the famous West Side Market, but was saddled by quality-of-life issues, like gangs, arson, and hookers bringing suburban johns to people’s backyards.

Even the snappy new name for the neighborhood was ignored. Colloquially known as “Clark-Fulton” since its glory days as a shopping district in the 1950s, the neighborhood’s official city brochure featured sepia-toned streetcars, Mid-century men wearing fedoras, and cars wearing fins. Without a time machine, it had nothing the Creative Class could possibly want; no foundation to build the “sense of place” it so desperately needed to function, except the crumbling Rocky Marciano Boxing Gym. So “Clark-Metro” would forever be identified by its chain-link fences, bottles of Wild Irish Rose on the sidewalk and establishments with signage in which “S’s” were replaced by “Z’s.

And guys like Santa Claus. We nicknamed the weirdos who passed by our big front window, and of course Santa was easy to name.  The bitter but humorous irony of his persona befitted the neighborhood, along the lines of George Bailey snorting to Clarence on the barstool, “Yeah, you look like the kinda angel I’d get.”

Each street kook made his or her distinct orbit around our building. The manic Mercuries whizzed by five or six times a day, while the gravitas-laden Saturns circulated only once a week. Santa Claus was an anomaly: a large body with a lunar-like cycle. Every morning I found him plopped on the sidewalk next to the ATM next door to our office, as guileless as a cat draped atop a bird feeder.

One morning he asked, “Hey miss … miss, can you spare a couple bucks?”

Like the other passersby, I politely said “no, I’m sorry,” and stepped past him. But inside I was screaming, “Are you fucking kidding me?” As aVISTAI made a little over four dollars an hour, well below minimum wage. For breakfast that morning, I had eaten half of a stale peanut butter sandwich. For gas money I had to cash in pop cans in a machine that sat, ironically, next to the shelter where Santa Claus lived. Fourteen cans would weigh three dollars and seven cents.

Around lunch hour I went for a McDonald’s run. There was a knot in my stomach because I had organized a local business “stakeholders” meeting for that evening. Among other things, it would make them “partners” in National City Bank’s vision of the future: Hispanic Village. With our partnership, the bank would round up the Hispanics and get them to build a village. McDonald’s had already torn itself down and resurrected itself as a Latino monument, with tan, pink, and turquoise tiles. And Family Dollar had painted a folk mural of peasants leading donkeys through cacti, peasants who were the only Mexican residents in the Puerto-Rican neighborhood. Hispanic merchants themselves were dubious about the whole thing, and Hispanic residents were out of the loop altogether.

Beyond all this, I was nowhere near prepared for this meeting. I was just too disorganized to be a community organizer. Although I had my City Year volunteers deliver the flyers to local businesses and followed up with reminder calls, the coffee still hadn’t happened.

This was on my mind the afternoon I stepped onto the sidewalk, and found Santa Claus still camped out at the ATM, legs outstretched like a kindergartner during Story Hour.

“Hey miss … miss, can you spare a couple bucks?”

Now, I’d run across some insensitive panhandlers in downtown Cleveland, but Santa Claus took the cake. Even though I had walked past him three hours ago, he didn’t bother remembering me. I wasn’t even a person to him, just a “miss” with a purse. Yet, I could distinguish him from other panhandlers. I was even part of a group effort to give him a nickname. So I let him have it.

“Jesus Christ, you already asked me this morning! If I didn’t have it then, why would I have it now?”

Hours later, no one showed for the meeting. My boss was pissed and let me know it. I went across the street to the Family Dollar to buy a can of cheap coffee, telling myself if even one person showed up, at least he would have coffee. The cold April drizzle grew heavier, and worms contributed their grossness to the clumps of black snow and soggy litter; I was down there with them, even in my bright red vinyl flats.

I entered the vacant hallway of the store, and there was Santa Claus, sitting with legs outstretched on the floor. I didn’t acknowledge him but on the way out, feeling a little conciliatory, I said to him, “Too bad it’s raining.”

Okay, so apparently he remembered me now. The gloves were off and so was the charm. He hadn’t even called me “Miss”.  I started walking toward the door when he added: “You’re too ugly to melt.” I forced a nervous laugh and decided to let it go. I took a few more steps when he added, “Those sure are ugly shoes.” I stopped for a second, and then continued walking.  Let it go, I told myself.  Finally, just as I reached the door he yelled down the hallway, “Have a miserable life!” Okay. That was it. I turned around and screamed back “SCREW YOU!”

Lucky for me, the new security guard at the bank building, Luz, was more engaged than the old one, Leonard. You learned not to ask Leonard how he was.

Leonard would stomp from one end of the crumbling parking lot to the other like a Mongolian warlord, black unibrow furrowed. His operatic plea for a guard shack would refrain at the end of the day.

The next day Santa Claus wasn’t next to the ATM machine. When I was safe inside the office, I heard a ruckus outside on the sidewalk. I looked out the window and there was Leonard’s replacement, Luz, standing in front of him, blocking his way. She had a cute braid down her back and light freckles, but she was fierce.

“No, no, no, you can’t come here and insult people. You leave her alone,” she said.

“Hey! Lady with the red shoes!” She stood in front of him as he tried to look in the window, waving his arms to get my attention.

“We’re okay, right?” he said, doing the quick point from himself to me and back. “You know I didn’t mean nothin’ right?”

Shrugging his shoulders nonchalantly, he said, “I just didn’t like the color, that’s all.”

Six months later I would be let go from the CDC and VISTA service for organizing a housing fair that was a complete bomb. A year after that, the CDC director who fired me was fired. Four years later the CDC itself folded and Hispanic Village was scrapped.

But Santa Claus is still roaming the neighborhood in his white bearded glory, sitting next to the ATM machine, where he is in the perfect position to be a connoisseur of shoes, in a Creative Class all his own. 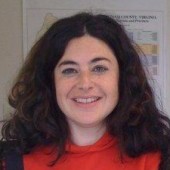 Sarah Tascone is a free-lance writer living in Washington D.C. She survived the Holy Roman Catholic Church's Rhythm Method in Akron, in 1967 and grew up on the shores of Lake Erie. She also writes short fiction and tries very hard to improve her poetry.