He first thought of photographing the scarecrows at breakfast. Dozens stood in the cornfields surrounding their cottage. Scraggy beasts, blunt features blurred by wind and rain, straw bursting out from burlap sleeves. And he was doing nothing then, had just moved to the village, flown across the ocean, traipsed across the salty sea, his wife liked to say, so why not do something?

She had come to write a book and he was to follow; follow the folly, follow the raconteur, singing in the grassy knolls of her countryside. She was famous then, had written a book about a wolf boy–had soothed the savage, all the critics said. Her return home was inevitable; the prodigal girl returns this time to fanfare and socials.

And he had expected pleasure: long-winded fêtes and tea parties and crumpets and bowler hats but instead there was bawdiness, rough pats on the head and forearm, heaps of burliness thrown at him in the local pub–this was the countryside, be a man, and my god, they practically threw a plow at him every time he walked by.

He had been roped into the slaughtering of hogs, had been taught how to make hare stew and had even been given a tour of a urine soaked hound kennel. His wife seemed happy, had started a new book, it’s about New Jersey, she’d said and he sighed. But the scarecrows–he started to shoot in the late afternoon, when the sun was just bowing, the low flung sun that never seems to warm anything here. Alfred he liked to call one, a mopey fellow in Brandon’s marsh, a twig for a nose, why had they bothered? And there was Janet, her large breasts made from flour sacks stuffed with peat and someone had even created an old dog in a barley field, in mid-run, vapidly chasing unseen birds.

He printed the photos himself, built himself a darkroom in one of the old utility rooms where the pasty faced cooks had killed chickens once and he always smelled blood as he developed the film, as the scarecrows merged from shadows and made themselves known.

I like those pictures, his wife said, they remind me of something and he thought they reminded him of nothing; they were symbolic only of taste, he thought, taste and sound and he put a few up in the pub, the church even liked them! These are symbols of the Eucharist, the pastor said, the bounty of our bread and so on, holy good thoughts because he thought them all Wickermen and knowing and just then he had started to feel welcome.

Felt he could sort of grind himself down now; wallow in their customs and pleasure and food. And just then, his wife wanted out; I want to go home, she said, my other home, my imaginary one, not this real one and they took a boat back this time and he often thought of the scarecrows, how the farmers never bothered to give them shoes, so if they ever thought of escaping, jumping from their wooden stakes and running through the fields and fens to find a home, any sort of home; the barley stalks, the potato fronds, would reach up and grasp their bits of straw and capture them and they’d fall and die once again. 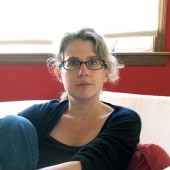