On the day I jumped from the tree, the sky overhead was blue and beneath me a large tractor tire filled with sand cushioned my landing to earth. I glided effortlessly down, floating lean and leaf-like.

The beautiful sensation of mid-air flight felt freeing in afternoon sunshine. My pink shorts were torn at the hem but at the age of seven I had not noticed. My landing was clumsy, the sand sprinkled my eyes and I paused only to balance before remounting the arborous perch.

That day I jumped from the tree, I did so willingly to inhale a joyful momentary thrill. The view from the tall trunk had distracted my focus from the hard-plastic, yellow spade hidden under sand, amongst weathered metal Match Box cars.

It was only on my fourth scaling of the rough bark that I noticed blood trickling annoyingly from under my right knee.

The blood was no concern. Before leaping downwards again into deep sand, I braced myself between two branches and flittered a glance to the red ooze snaking around my shin, entering the lacy cuff of my white anklet cotton sock. Undeterred and unshaken, I leapt anyway.

The grown-ups were their usual scattered selves that day, not to be seen from early morning till dusk. Occasionally I would hear my name called on intermittent summer days when my grandmother roused from hours of automatic-pilot Solitaire games dealt from her geriatric lap, cards fanned across her quilted polyester floral bedspread. Monthly, a woman arrived to hold me close and breathe into my ear a promise that she would return to collect me one day. She would remind me before driving away as a passenger with the kind, bearded man that I must never forget that my mother loves me.

Twice a year—no more—a tall, dark figure of a man showed up. My grandmother would push the man in my direction and make the stern announcement that this was my father, then the wizened woman would urge him to hold me. I knew that this stranger preferred to lurk in shadows and douse Granny Smith apples with salt rather than touch his child. I would observe him chomp ferociously at the green fruit, my own small, scarred jaw tightly clenched in contrast to my over-dilated blue eyes. I watched him and felt fear in my belly. On the one occasion father and daughter connected, he captivated me with an impressive performance of Dueling Banjos in the kitchen, his long fingers plucking with precision; then quickly, the piercing of his jade eyes stung my face and that sole warm exchange between us was dissolved by the black magician’s heart he hid from wise onlookers. And who was wiser than a child?

The day I fell from the tree was hot and my final landing was not soft. The sun dimmed quickly and I raised my scarred chin skyward, slender hand saluted above my eyes to discern the figure blocking the light from meeting my face and now two bloodied knees.

The man standing beside me was a boy—a boy nearly grown. On cusp of manhood, this figure of seventeen, sporting a darkened feathery moustache atop his lip, outstretched his slim arm. The olive tone of his skin a sharp distinction to the fair pink of mine. He told me to take his hand and I obeyed because I was small and my knees really did sting. He helped me to my feet, my ruby-red trainers embedded in sand, then he brushed a smattering of brown granules from the front beltloops of my pink shorts. I watched his fingers flick quickly at my waist then snap up to his black hair, smoothing the strands of fringe stuck to his sweaty brow. His hair melded back into the distinguishable, sculpted coif I recognized was popular with older boys at school and in posters of heart-throbs on my teenaged auntie’s wall.

He asked was no one minding me and I shook my two long plaits. He told me his house around the corner had plenty of plasters and that his mother was a nurse and that he had boxes of chocolates and biscuits and juice. He smiled and I felt grateful that someone wanted to clean my knees before my favourite socks would be ruined and my grandmother would deliver justice with a smack of the pink hairbrush across my bottom.

I followed that boy, that young man who seemed kind but was not kind and did not give me chocolate or plasters or juice. He played me music that afternoon in his bedroom about joy and fun and seasons in the sun and I then forgot about crusty, red knees and the hiding that awaited my return home when dusk turned the summer sky cold. I liked the music, the attention of another and this new, different feeling of freedom. I was seven years-old but craved with voracious hunger a chance for the cage door to open so I could fly.

The girl that flew from the tree was me. I flew from the tree not with grace but with trust that should not have been trust but in youth I knew little. I was played the tune about joy and the sun on many afternoons that summer when grown-ups had retreated to their own caves of isolation: the old woman shuffling aces and jacks with distorted arthritic fingers; the monster father devouring salty apples in his menacing dungeon; the sweet-smelling mother telling the kind, bearded man how much she dreamed for a beautiful life with her stolen, golden child.

While they played out their dramas, that golden child was falling, she fell. And no one noticed I was never a child again. 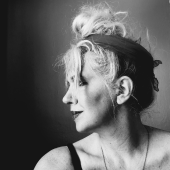 After years spent editing other writers’ words in Ireland and New York, Em Kelly now crafts micro-essays and is finessing her first two novels towards publication. Em's most recent creative nonfiction appears in Ellipsis Zine, her flash in The Phare, and she is a finalist for the 2020 The Allingham Literary Prize. Em occasionally rambles at emkellyblog.com and liaises with the world via Twitter @EmKellyWrites. Her curiosity is boundless.