I was chosen to lead the light factory
for no reason I was told or could
discern. I’d seen no more dark than
anybody else+had had
no easier a time finding any
scenario’s switch, was no better at casting
the usual into that’s-it illumination.
They were all waiting for me
to speak. I stood wearing shoes I suddenly
felt were too stupid, not leaderly enough,
and then I sat. I chose to sit
among the other workers and
thought light thought light thought
fuck what do I do now. I pictured my blue
flashlight in a cage, pictured the blink
of a turn signal as a car moves toward
its accident, pictured a Zippo in place
of the headstone marking the grave
of the grandfather who died two months
after I was born and whose life
I’ve always wondered if somehow
I’m borrowing, it’s akin to the way
I plant cucumber seeds in dirt-filled egg cartons
in spring, how old form can dictate
the shape of new growth, “No more
off,” I said before I thought, “and no
more on.” There. Something. I said it knowing
it’s only illusion that there’s silence
and then voice filling it, knowing
the edged ways we grope toward
what we hope might be some final thing
to cling to or point at and say I got
there—every finality’s a lie. There was noise
before I made more noise. There
was quiet before I again was quiet. There
was reaching before any of us arrived
with our empty hands. “There’s even
dark spots on the sun,” I tried. Eventually
we went back to work, shaping glass
and metal into forms that cast light
just as we designed them to, amazed
how little it felt like control. 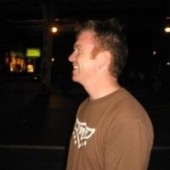 Weston Cutter is: (a) from Minnesota; (b) the author of the book of stories You'd Be a Stranger, Too and several books and chapbooks of poetry (All Black Everything, Enough, Regulation Ghost), and (c) an assistant professor at the University of St Francis in Fort Wayne, Ind.