I was nine. We were visiting my crazy side grandma, in Texas.  We were staying in a secret motel with a highly chlorinated swimming pool.  We were in the carpeted lobby, waiting.  My uncle had a paper napkin with the four corners rolled up into points.  Something was under it.  My uncle flicked whatever it was with his finger.  It came alive.  The napkin moved like a crab, it sauntered side to side.  We were sure he had some kind of tiny animal, under the napkin.  We couldn’t believe it, when we finally found out what it was, under that napkin.

Years later, at the North Regional Wake County Public Library, crisp leaves blew by the plane glass window.  I looked out into the parking lot.  I thought about Dewey Decimal.  That was one cold-hearted motherfucker, for sure.
I drew a cube on my college ruled notebook.
I felt something watching me, in the corner of my eye.  That’s when I saw it.  The Wolfman.  He was standing on the grassy hill, staring at me.  He was covered in red fur.  He walked to the front of the library and put a red book in the slot.  He turned and walked off into the twilight.
I went to the circulation desk.  I could see a bin, beneath the slot, with a pile of books in it.  One of those was the Wolfman’s book.  Perhaps, that book could hold a key, a clue to the mystery of the strange Wolfman.
I approached the librarian on the other side of the walnut counter.  “Those books over there,” I said, pointing, “I’d like to see who checked out the most recently returned book.”
The librarian said, “Without a search warrant, forget it.” After that, other townsfolk reported seeing a similar Wolfman.  He was spotted at twilight or predawn hours.  Often he was seen running errands or doing ordinary daily activities.

Oracle Of The Old Albino Woman

It was the last summer before cars.  I was fourteen.  Billy Morgan was fifteen.  We hopped off the back of the pick up truck onto the gravel road.  I blocked the setting sun with my hand.  The truck sputtered away.  We walked down the broken path leading into the woods.  The ground was damp.  The sun was falling.  The shadows were elongated.  Crooked trees and roots lined the unworn path.  High grasses waved in the gentle twilight breeze.
“Look.” said Billy.  “Down there.  This is where she is.”  He pointed to the flickering lamplight through the open window of a shanty house.  We walked off into the brush towards the house.  It was a rundown shack; made from pieces of fences, and broken palettes.  It was bound together with rope and plastic.  Several cement block steps lead to a crooked door.
I raised my knuckles to knock on the door frame.
“Hello,”  said a short black woman.  “Come in.”
The door swung open and we entered the interior.  It sprang shut.  “Sit!” said the women.  She pointed at the floor.  “Sit!”
We sat on the floor.  The woman disappeared behind a hanging tapestry.
Billy sat indian style.  I fiddled with the burlap sac I had brought.  Little things inside frolicked at my feet.  A pungent aroma wafted in, as the woman returned.  “She will see you now.”  We stood.  The woman lifted the hanging cloth and gestured into the darkness behind it.  We walked into the backside of the shack.
There was a massive root of incense burning in a metal drum.  Me and Billy sat on the floor in front of it.  We stared at the embers as they slowly consumed the incense.  It hissed and popped, filling the shack with smoke.
“Did you bring the sacrifice?” asked a voice.  We looked up from the incense.  She said, “You have brought a gift for the oracle, have you not?”
“Yes,” said Billy, “We have what you asked of us to bring?”
“Then give it now,” said the voice, “Don’t waste my time boy!”
“Here,” said Billy, offering the burlap sac.  In the darkness the figure shuffled.  In the light of the flickering incense I caught a glimpse of an albino hand.  The mysterious old woman took the sac.  She flicked it and watched a small something inside move.  “A fine sacrifice.” she declared.  She dropped the sac in the boiling cauldron.  She stoked the incense.
They sat in silence.  Then I tapped Billy on the shoulder.
Billy said, “So we have given you what you asked for.  Now we are ready to receive the prophecy.”
The woman stirred the cast iron pot over the glowing orange bricks.  She bent down and took the vapors deep into her lungs.  She was still in the darkness.  Then she spoke, “one of you, will kill the other, in two days.”  Then she spit into the boiling pot.
So, we left the dark house.  We walked to the top of the hill, and agreed to go our separate ways.  We wouldn’t contact one another for an unspecified amount of time.  He went one way, and I went the other.  I never saw Billy again.  I don’t know what happened to him.  He just vanished.

I walked through the automatic doors and into the air conditioned grocery store.  I looked at the beautiful bright yellow lemon display.  Whoever, had done this was a professional, for sure.  I grabbed the eleven or twelve best lemons, and put them in my burlap sac.

So I waited by the circulation desk.  I planned to check out the red book as soon as I could.  In a short time, another librarian came by.  She put the books on a metal cart.  She stamped the cards inside, and rolled on.  She crossed into the large aisles.  “May I help you,” she said.
“Yes,” I said, “I’d like to check out one those books.”
“One of these,” she said.
I saw the red book.  “That one,” I said.
She handed it to me.
I looked at it’s red cover.  I read the title, looked at the author, and flipped through it.  I felt the paper.  I approached the circulation desk, triumphant.
I checked out the book.  And I walked out of the library.  I took another look through the pages.  I looked at the name of the last person to check out the book. 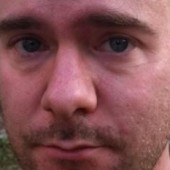 Scott Rooker is an artist, musician, and writer from Raleigh, North Carolina.