Self Portrait as Allegory of Self When I ask my mother for the name of her father, she hesitates. A pause, simply because she’s forgotten. Her Japanese father—dead before she was two, a man who left her nothing but straight black hair, eyes that squint when she smiles.

In high school, I have to write a paper about someone important during the Renaissance. I’m tired of a man-populated past. In one of my mother’s college art history textbooks there’s one mention of Artemisia Gentileschi, a Northern Renaissance painter. It says that she’s best known for the 1612 trial for her rape.

I dream of seeing a painting by Frida Kahlo. My mother says she once saw some of her work at a visiting exhibit in L.A. She calls them magnificent, says she’s never seen colors so rich, a blue so deep.

When I was a child, I had a best friend whose mother was Mexican. My best friend was pale and blonde. When the two of us went anywhere with her mother, people always assumed I was her daughter.

Artemisia Gentileschi only acquired skills as a painter because her father, Orazio, was a painter and taught her. Orazio was well known and kept good company. In 1603, Orazio and Caravaggio stood trial together for slandering another artist’s work. During the trial, Orazio mentioned Caravaggio often visited the house, and once came by to borrow a pair of angel wings.

How easy to speak too much of men when discussing a woman’s past.

My grandfather was interned. His family lost their business. When released, they moved from Phoenix to LA. I’ve never met any of my Japanese family.

She decided what she was, and so became it.

Frida Kahlo adored her father and cared little for her mother. Her father, Guillermo, was a German-Mexican photographer. Frida was part Mexican part German part Jewish part indigenous Indian, though it’s this latter identity she so strongly embraced, the one she’s known so well for. She decided what she was, and so became it.

I have two favorite paintings by Artemisia Gentileschi. One: Judith Slaying Holofernes. What’s more remarkable than her technique, the use of light, is Judith and her maid, their arms thick and strong as they hold him down. Judith’s face as she saws a sword through his neck, as she allows him to bleed. Caravaggio painted the same scene. Gentileschi’s Judith would overpower his easily, would pulverize his to pieces, if she wanted to.

When my mother first met my father’s parents, my father turned to her, blue-eyes apologetic, embarrassed. He said, Don’t tell them you’re Japanese.

Everyone knows about the tumultuous relationship of Frida Kahlo and Diego Rivera. He was 21 years older, 200 pounds heavier, nearly 12 inches taller than her polio-damaged, trolley-pole-pierced-through-uterus body. In Mexico: it’s her face I see everywhere—on earrings, on peeling posters slicked to building walls, on ads for some cultural event or other.

My mother grew up in East L.A., where she was white because she wasn’t Hispanic. She ate candied cactus and tamales. She can’t use chopsticks, taught me the wrong way to eat sushi (place the pickled ginger on the roll, it’s delicious!). We made cascarones for my birthday parties. We reveled in filling those hollow egg shells with confetti and sealing their innards shut with thin tissue paper.

When I travel to Mexico she asks me to return with a gift—an embroidered huipil like the ones she coveted as a child.

In a taverna in Greece, I’m told I don’t look American.

Frida Kahlo is most well known for her self-portraits. I buy a calendar full of her. Save the images and decorate my walls so that her face repeats around me, at once powerful and magnified.

My senior year at a liberal arts college, the director of the office for international education said I would one day learn to embrace my Japanese heritage. He said this to my friend, in front of a full classroom. He said this, because I had once written him that I didn’t need nor want a host family designated for domestic minorities. I’m still not sure how they determined that I was a “minority” (I’m not, I’m not).

I write fiction because I’m more interested in others’ stories than my own. But I understand the power of self-portraiture, of creating yourself exactly the way you are, if you want to. But this also is fiction—a creation of what you want, a mode of being exactly how you want.

I don’t want to discuss it, but I already have—as if impossible to remove a woman’s body from a man.

My second favorite painting by Artemisia Gentileschi is Self-Portrait as Allegory of Painting. The painting: of her and only her, with a paintbrush in her hand, her body turned and focused on a painting just outside the frame. The focus on her power of creation. People say her Judith Slaying Holofernes was also a self-portrait, revenge against the man who raped her. Because it had to be revenge. Because it couldn’t be a woman showing a woman exactly as she is: powerful. Because this woman had to be about a man.

At La Casa Azul, I walk in Frida’s footsteps through unbelievably blue walls. I walk hand-in-hand with my boyfriend. We take pictures of ourselves reflected in mirrors. We capture a fraction of our faces, choose the angle, the portion exactly how we’d like.

Feature image is a section of Judith Slaying Holofernes (1614-20) by Artemisia Gentileschi. 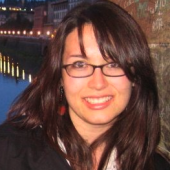 Michelle Donahue's prose has been published in Sycamore Review, Arts & Letters, CutBank, and others. She is pursuing a PhD in Creative Writing at the University of Utah and holds an MFA in Creative Writing & Environment from Iowa State. She is a prose editor for The Adroit Journal.