Malloy couldn’t wait to show off his new boat. We walked behind the yacht club to where the cruisers, sailboats, and pontoons bobbed on a gentle morning chop. Our wives remained under the veranda, sipping Mimosas in their straw hats. Bloody Mary in one hand, the other free to gesticulate, Malloy talked about what a sex machine Niki used to be.

This morning, she rocked Lake Norman in a yellow cover-up and matching Kate Spade bag. My wife Jill wore a flowery, flowing sundress, chosen to obscure the weight she’d recently gained. I guess I’d gained a few pounds, too.

“The national average is twice a week,” Malloy said. “But we did it morning, noon, and night. We spent a week in Cancun and never left our room.”

He was a good-looking guy, square-jawed and fit. Niki was attractive enough, but I’d never suspected her of being such a vixen. Her kids, before they left for college, played soccer with my kids. She attended church and served on the local Parks and Rec board. On the other hand, she wore make-up on the tennis court and was rumored to have once surrendered a Tori Burch earring to the green clay. Malloy’s boat was moored on L dock, near the far end. We paused half way there, on the boardwalk, leaning on the railing, and enjoying the splendid Carolina morning. Other boaters were out, gassing up, gearing up, and loading up.

“The woman was insatiable,” Malloy said. “We’d try every position until I couldn’t go anymore, and then she’d bring out her toys. She had a toy collection you wouldn’t believe.”

He slapped at his tears. “It’s just we were fucking amazing when we fucked.”

“We passed through our ‘swinger’ phase, early on,” Malloy said. “I suppose you and Jill did the same.”

But, years ago, we’d hosted Tom and Teresa Pittman for dinner, and they’d come on strong. Jill put an end to it by locking herself in the bathroom and refusing to come out until the Pittmans went home.

“Back in the day,” Malloy mused, “I raised a pole in our bedroom. Niki stripped and danced for tips. Lap dances cost me extra. We messed around with handcuffs and chains, too. God, she was hot.”

The Malloys weren’t exactly our best friends. We knew them through tennis and the yacht club. He made his money in financial services, and I appreciated how he’d refrained from trying to sell me insurance over the years. We usually talked boats or tennis or kids, but I could see he needed to get this relationship stuff off his chest.

Malloy peered out over the lake, taking in the glitter on the waves and the McMansions straddling the peninsula across the cove. “The other day she told me she never really enjoyed blow jobs. I said, honey, you sure seemed to enjoy. You know what she said?”

I shook my head.

“Said how would you like it if some guy blew his nose in your mouth.”

I’d never thought of it that way and told Malloy as much.

“Yeah, I know, right. So, how’s Jill down there?” He pointed to my crotch. “Any problems?”

“Well, Niki’s got big problems with her veejay. We tightened her up a while back, but now something’s wrong. I haven’t even seen it for months.”

Come to think of it, I hadn’t seen Jill’s for a while, either.

I said if he meant hot flashes and night sweats, you could say she was going through menopause.

“We’re down to hand jobs, if I’m lucky,” Malloy went on. “But she’s totally mechanical. No dirty talk or edging. Right down to business. Just jerk it out. C’mon,” he said, motioning for me to follow.

We drifted out to L dock where he punched in the code for the gate. We strolled along, passing and greeting Malloy’s neighbors. They scrubbed decks, sunned on plush leather seats, and fished off their bows.

He’d bought quite the boat, dubbed Malloy’s Toy, a forty-two-foot cruiser powered by dual in-board engines. A canopy shaded the captain and first mate’s seats and there was plenty of room for guests on both the fore and aft decks. Down below, the galley featured a well-stocked refrigerator, two-burner range, and dining table. The hall offered a shower on one side and a high-tech toilet on the other. The master bedroom came equipped with king-sized bed, big-screen TV, and built-in bar.

Malloy showed me how to control lighting and surround-sound from the bed. “Something, isn’t she?”

We returned topside where he insisted I sit at the wheel. He opened beers for both of us.

“Men get menopause, too,” he said. “Fortunately, there’s a little blue pill for that, not that you or I need it.” He rapped knuckles on the teak-­inlaid dashboard.

I wanted to be a good listener, but honestly, Malloy was beginning to depress me. I welcomed a break in our conversation as we watched Dupre expertly maneuver his schooner out of the marina before unfurling sails and entering the main channel. A fine breeze was up, the riggings clattering, flags flapping.

One, and then another sob, escaped Malloy. “Jesus,” he said.

I placed a hand on his shoulder. “You all right?”

He slapped at his tears. “It’s just we were fucking amazing when we fucked.”

Our wives had descended the stairs and were crossing the long, green lawn out to the docks. They giggled like girls, the breeze teasing and lifting Jill’s sundress and Niki’s cover-up over hips and thighs. They looked lovely, so lovely, in the honeyed sunlight. 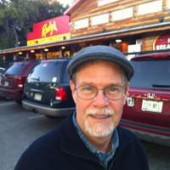