So you’re the girl crossing a caged walkway
bridge over the interstate, and at first people think

you would throw your textbooks onto the road
below if you could, but you don’t have any

beef with geometry, even the taste of cheap gin
has acute angles. You’re going to a frame

house with mattresses on the living room floor
and green carpet that double-takes as moss.

but so grandmother at the same time. Maybe
you spent summers in the twin of this house.

You could find the bathroom blindfolded, or
hustle a cup of tea to the front room before

Gram noticed the kettle had ceased its catcall.
This house has a triple-beam on the mantle,

the old days (are glass milk bottles the most
frustrating, or the way the children can travel

neighborhoods on their own?). This house
looks out on the highway, and the backfires

sometimes feel nostalgic, like distant pops
at Midnight Mass, not good but immune

somewhat behind stained glass and countless
babushkas. You’re the girl who finally

gets to pedal down to the dollar store alone,
two quarters like armor in the well of her shoe. 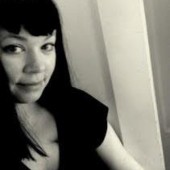