to build a small comb

no more than eight holes

in its ash-walled exterior so far,

a little set of mummified volcanoes

right at the apex of the canvas umbrella

I put up to separate some of the porch from sun.

sort of whizzing around

from time to time but mostly

just crouching on top of their mound

surprisingly still for beings who own flight,

bodies too often like mini sausage links, side by side,

stretching antennae, legs, wings from the nest up to the sky.

I know I should

get rid of their nest while

it is still small and they are only two

but instead, I find myself spending time

watching them hang at that impossible angle,

upside down, twin Michelangelos set to work. I wonder

if they sense me there at all, beneath their empire, contemplating their demise.

I wonder whether one

or both would charge if I knocked

their house down, wonder if we could

neighborly. I wonder what do wasps eat to stay alive.

Do they talk to each other, do they make plans, strategize?

And just how big will this monument be if I don’t decide otherwise.

I can’t help but ask myself, when baby wasps come, will they be grateful

to their God, and if so, how long will that gratitude last if they are allowed to thrive? 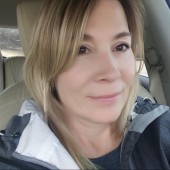