Amazing how long ten seconds can feel when you’re deep underwater, trying to avoid a maelstrom of blindness and disorder just inches above your head.

The girl braces herself.

There’s no preparing for the cruel assault of ocean water that’s barely 60 degrees. It pours over her like an opened bag of ice. She duck dives as deep as possible, angling her surfboard to pierce the crazy tumble of glacial water.

But the monster wave catches the girl. She tumbles, forced to hold her breath for at least ten seconds, then pops up to the surface. She starts to paddle out again, praying she’s got time to make it out before the next wave barrels in from the horizon. This one, a twelve-foot beast that will plow the girl down, hold her dangerously close to the pit of the ocean before spitting her out, if she’s lucky.

Unless, instead, the girl can ride the wave.

Which is what she does. Just before the wave’s thick lip shows tell tale feathers of white, the girl turns her board shoreward to find a comfy little nook. She’s off center enough to guarantee a safe journey. Though safety is a relative term with a wave this massive and steep.

There’s no time to prepare. Just pop-up and fly. The girl is coasting down the face of the wave, toes gripping, thighs burning, every other muscle in her body intuitively tensing and relaxing, keeping herself upright and in the right spot. Her frenenemy, the wave, breaks and tumbles close behind, trying to catch up and swallow the girl whole.

Soon enough though, they’re good. No, they’re perfect. The girl carves along the wave’s beautiful face like a loving make-up artist making a model even more spectacular. The girl sees where the wave is going and willingly follows. She crouches, shifts, thrusts her hips. She leans forward to speed up. She twists her shoulders and tosses her arms. The girl looks like a lunatic, but she doesn’t care. The wave lets her do it all, holding a perfect curling shape for a glorious ride.

Until, of course, the wave dies, as all waves do. But the wave has been a wonderful friend, so before its fatal crumble, the girl calls out, “I love you!”, then heaves herself over the shrinking watery hump, mourning the wave’s demise.

But the girl’s sadness only lasts a second. There are plenty of other wave monsters for her to play with.

If only the people monsters on land were this easy to get along with the girl might feel normal. Or as close to normal as a water-logged, tongue-tied girl could ever feel. But she won’t think about that now. Now she’s deliriously happy. She’s with her closest friends and they’re dancing together, having the time of their lives.

This is an excerpt from the novel, Wavehouse (August 2016) 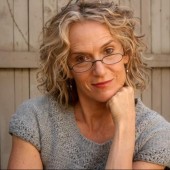 Alice Kaltman is a writer, surfer, and parenting coach. Her novel WAVEHOUSE comes out in August 2016. Alice's stories appear or are forthcoming in 34th Parallel Magazine, Storychord, Luna Luna Magazine,The Stockholm Review, and Joyland, among others. Her articles on Parenting can be found at Family Matters NY, Babble, and A Child Grows in Brooklyn. Alice splits her time between Brooklyn and Montauk, New York.