You are waiting, waiting for the moment the voice comes across the radio, says, Rodney Norris, and you will think, My husband. Not just Rodney, not Roddy, not Honey, not Babe, not Man-­‐of-­‐my-­‐dreams. My husband. The words official, appropriate, distant.

You and Denise were talking leftover turkey when the signal 99 blasted through. My mother made the worst tetrazzini, Denise said, and you hooted out a laugh; then the siren hurtled over the speakers. Everything stopped. You and Denise locked eyes.

Who is it? you heard yourself say, but your hand wasn’t on the mic. You were speaking to the small glassed-­‐in room. On the other end of the radio, silence.
Denise made the call. She dialed, dialed, and then said, This is Lancaster Power Department. We have a man down at 1506 Blenning Street. Pause. We don’t know. They need an ambulance.

Somebody pulls your chair back from the desk. Somebody puts their hands on your shoulders, firmly. You assume it is Charlie, out from his office coming to help. You don’t look. Through the glass, women at desks turn to see what’s going on.
On the wall is a list of radio signals, yellow edged, with phone numbers scribbled in the blank spots. You stopped needing to look at it years ago – and Denise has been around longer than you – but it’s still there. Signal 99. Man down. (Siren will sound.) Every signal 99 leaves your stomach like a vacuum, but this one is different.

Denise presses the mic. Base to 45. Crew 45 come in. Can you tell us what happened?

Can you tell us who’s down?

You wouldn’t admit it, though part of you aches for the fact of it right now, but you used to kind of look forward to a signal 99. Dread has a way of making the air vibrate. It isn’t that you didn’t worry for the man. You worried. But you loved how everything shifted into high gear. You were a team, back here at the station, when there was a man down. You waited together. You notified the proper people. Bodies rushed in and out of the radio room for updates. When the reps in the customer service room next door answered the phone and a little old lady said, I ain’t got no power, the rep would say, Ma’am, we’ve got a man down. It could be awhile.

You say a silent prayer of apology.

It isn’t like the electricity drew you to the job. You just graduated from high school, couldn’t decide what was next, and your mom knew someone who knew someone and soon you were sending calls over the radio. Lots of signal 51 – boot on meter, no pay; followed by signal 52 – reconnect meter. Signal 10 – power out at transformer. Signal 20 – power out at individual house. You had a radio voice, they told you. You got along well with the men in the field. You didn’t really look for anything else.

The first week on the job, they sent you out on a bucket truck, borrowed hard hat and all. They rode you out to the lines and explained the system from start to finish, beginning to end. You know how electricity moves from the generating plant to the high transmission lines to the substation, where the voltage is stepped down. At the substation they tell you, Keep your hands in your pockets. Then out the distribution lines, past the white ceramic insulators and the plastic squirrel guards, to the transformer, where the voltage is stepped down again. Then on to lines to each and every house, where it travels through the meter and into a microsystem of its own, right into the individual socket. Turn on a lamp and you’re initiating a journey.

Since then, you can’t drive a street without noticing the lines, the strict architecture of it all. You scan the system and wonder what will cause the next break down. Will a wrong step of a wayward bird short it out? High wind send an arc of fire between the lines? Car hit a pole?

Sudden blow of a transformer create a fountain of light? You wait for the system to fail. Your job is about the system failing. You and Rodney have that in common.

Scotty Hanscomb comes over the radio. 22 to base. Denise takes it. Go ahead, 22.

We’re finished up over here on Elm. Should we head over to Blenning? Go ahead. Keep the radio clear. Call in when you know what’s going on. Will do. Over.
It won’t be long before we know something, Denise says, still facing away from you and looking at the window. She is settled firmly in her chair.

The person behind you squeezes your shoulders tighter, says, Won’t be long. Charlie.

Why isn’t anyone else here? Why isn’t the entire station gathered in the room?

You catalog through the day to see if there’s a sign that anything out of the ordinary was about to happen. Rodney woke first, as usual, and was out of the shower with coffee brewing before you sat up and started shaking the night from your limbs. You checked the date, did some math. Still in the dead zone between ovulation and your period. Too late to make a baby, too soon to find out if one has been made. Your goal is to interrupt the cycle, Dr. Miller told you. Not today. You got out of bed and touched your toes.

When you got to work at 8:00, Rodney’s white pickup was parked in its spot at the far right of the lot, and you parked next to it. The day has been routine. Some disconnects, some reconnects. A subdivision out on the east side. Crew 55 redirected the loop and then spent a few hours repairing damage to the underground transformer. Someone called in a line down on Blenning about 1:00 and you sent it to Crew 45. They’d been sitting idle for awhile.

It was a regular day, you say.

Denise spins around in her chair and looks right at you. Mandy, she says. Your name.

Amanda Norris. If heard that way, Rodney might think, My wife, in that distant and formal way.

Mandy, it may not be him. There are three men on that truck. It could be J.D. And even if it’s Rodney, it might be nothing. A sprained ankle, maybe. A little jolt. It doesn’t have to be dire.

Here are things you’ve heard electricity can do to a man: Throw him 10 feet in the air and clear across the street. Burn the hair off his head. Paralyze him on one side of his body. Stop his heart. Ignite his clothing all at once, so he can’t get out of it. Burn his internal organs. Set his grip on a live wire and not let him go. Stop his heart.

I know, you say. You smile weakly at Denise.

You were married to Hank when you met Rodney. Hank was your high school boyfriend, one of those who hung around longer than anyone thought he would. Even the occasional smashed plate never sent you further than to your sister’s for a few days. Until you saw Rodney

walking across the pavement at the Fourth of July picnic. Hank was working, you were alone, and Rodney – solid shoulders, sweep of dark hair, piercing black eyes – walked right up to you and said, You look like you need a refill on that beer.

In some ways your life was the same after you married him as it was before. Same chicken baking in the oven. Same sitcoms on Tuesday nights, on the same couch, with the same drinks making rings on the coffee table. In some ways it was duller. The air didn’t have quite the charge it once did. In most ways, though, it was nearly unbearably sweet. It wasn’t that he brought his whole paycheck home, or hummed the theme from Star Wars while doing the dishes, or greeted you after work with a Hey Beautiful. It was that after a just a few weeks, you couldn’t imagine living without him reaching out of his sleep to pull you closer.

When did you forget how precarious things are? Once a week, each man on the line takes his elbow-­‐length rubber gloves to a machine to have them tested. One pin-­‐sized hole can send electricity tearing through his body, and there is no way he could know it until there is nothing left to be known. Electricity is power and danger. Electricity is invisible and deadly.

Charlie likes to tell every recruit the story of how he once got to put on a space-­‐age rubber suit and go up in a bucket and place his hand on a transmission line. 110,000 volts of pure electricity, he’d say. It throbbed. You couldn’t see it, but it throbbed. He was high in a bucket, suited like an astronaut, two hands wrapped around a thick, living line.

You thought, one pin-­‐sized hole and you’d have burst into bits.

You can feel the dampness on the back of your neck, under your arms. A single drop of sweat runs between your shoulder blades under your sweater. You try to brush a strand of hair off your forehead. It sticks. You dig your nail under, shove it back.

The phone rings, a shrill sound that rips through the room. Denise grabs it. Yes, she says, then turns to you and whispers, EMS. They’re taking someone to County with severe burns.
Pretty serious, she repeats into the telephone. Who is it? Do you know the man’s name?

It doesn’t matter. You don’t need to hear his name. You see it all clearly already.

Systems are set up to be broken. One wrong step of a squirrel on the line, subdivision loses power. One too many bills late, electricity off. Hole in the glove, egg coming too early, too late. And you thought you had your life set up. Childhood, high school, Hank, marriage, job, divorce, then Rodney, Rodney, Rodney. Rodney Norris. How long could it go on? 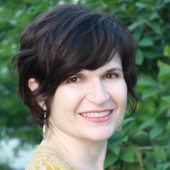 Vivé Griffith has been published in The Sun, Oxford American, Gettysburg Review, and elsewhere. She lives in Austin, Texas, where she directs Free Minds, a program offering a free college humanities class to adults living on low incomes. She also blogs most days at picsandparagraphs.com.