Charles the Second ordered 100 ravens
circling the Tower of London exterminated
because they blocked his view and droppings
fell on the telescope. His court astronomer

warned the superstitious monarch whose
father Cromwell executed that instantly
the King would disappear and the Kingdom
dissolve, in punishment for the black birds’

murders. The White Tower observatory
was moved to Greenwich and six ravens
with clipped wings saved. Six ravens still
and always live within the Tower’s walled

grounds, a seventh kept in reserve. They’re
fed sheep hearts, a ton a year, where Anne
Boleyn and Thomas More, other thousands
lost their heads, suffered strappado or rack

or died in long captivity. One female raven
after lunch often enters the kiosk to perch
on lap of the black-hatted, red-uniformed
Ravenmaster who pets her until she sleeps. 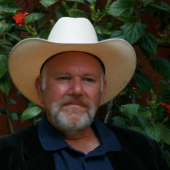 Nels Hanson has worked as a farmer, teacher, and contract writer/editor. He graduated from UC Santa Cruz and the University of Montana and his fiction received the San Francisco Foundation’s James D. Phelan Award. His stories have appeared in Antioch Review, Texas Review, Black Warrior Review, Southeast Review, Montreal Review, and other journals. Poems have appeared in Big Moon, Language and Culture, Angelfire, and Symmetry Pebbles. Hanson lives with his wife, Vicki, on the Central Coast of California.