You may feel that this postcard city’s name, Skyscrapers, is immodest. You may wonder if this city’s inhabitants believe in their hearts that they can scratch the surface of the sky. If they believe the sky has a surface. That the sky would condescend to bend down like a dog to let them pet it.

You may find the lights of this postcard city excessive, every window lit, suffused with gold light. You may wonder what the inner walls must be made of, to reflect such light. I have heard that the sight gives the inhabitants faith that tenements can be transformed into gilded penthouses. They see lightning touching a skyscraper spire as the extended finger of a god.

Some say the city never sleeps, and I believe this. The windows never shutter their lights, though they may wink at you if you stare long enough. This could be a red-tailed hawk returning to its nest on a twelfth-story ledge. This could be a host carrying a cocktail from room to room to a guest. Though this brief loss of light is probably only the building winking. 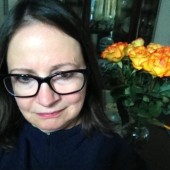 Barbara Westwood Diehl is founding editor of The Baltimore Review. Her fiction and poetry have been published in a variety of journals, including Quiddity, Potomac Review (Best of the 50), Measure, Rivet, SmokeLong Quarterly, Gargoyle, Superstition Review, Per Contra, Thrush Poetry Journal, Tishman Review, The MacGuffin, Unbroken, and Ellery Queen Mystery Magazine.