Sometimes, like today for instance, I want to say, “Fuck it, let’s get married.”

Not to stick to the script, but because you’re earnest in your desire to do such a terrible thing.

And you’ll say after the affirmative, “Let’s try to conceive.”

You’ll look me in the eyes and say, with square biz on your tongue, “You. Will be a good father for. My. Children. Our. Children.”

And this is where the two of us, parked in a car on an overcast day because that’s what artists in love are prone to do, will stare out the windshield to mull over just what the fuck we’re getting into here.

On the surface, this future conversation is inspired by love. But the time has come to think of legacy. And ascertain, once and for all, if this is the right choice, the best choice or the better choice.

I stare out the windshield at a green and beige swing set—a contorted escape pod. And I think to myself, “Fuck it, maybe I should run.”

Because this is the point where, should I say what I want to say, and let you reply with the expected answer, the ground underneath my feet will fade until I fall into the realest version of real life. I’ll enter some type of wormhole, with you in tow, and exit the amethyst tunnel reanimated into “us,” that is, no longer responsible for my own vices.

Our home will become a slaughterhouse.

I’ll sit on the couch, head held in sickness while watching a dead television show. Behind a closed door, your cries will bloom from a whimper into something apocalyptic. It’ll be the sound of an animal gutted from the inside, as if the knifepoint protrudes through the skin of your abdomen, as if serrated edges, dragged south toward your waist, will blare the opening notes of a years-long dirge, manifesting in the form of an emotional scar.

Will it be because I fucked your friend or whipped the children?

Will I turn into an alcoholic, an ape, one of those bulky, hulking blue-collared monsters flexing flabby muscles behind flannel sleeves?

Will I slap the terror off your face? Will I bruise you, thump you in the ribs with steel-toed boots, will I—after a night in jail—return, hat and flowers in hand, uttering promises? “It isn’t your fault I’m a failure,” I’ll say. “It isn’t your fault I had to call off a life of art to fend for us. It’s just—you make me so angry, sometimes.”

So I stick to the script and say, “I love you.” 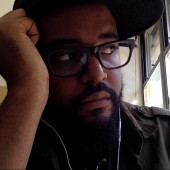 mensah demary is editor in chief of Specter Magazine, and is a columnist for The Butter Blog and Fourculture Magazine. His fiction and nonfiction has appeared in Metazen, Little Fiction, PANK, Thought Catalog, and elsewhere. Originally from New Jersey, mensah currently lives and writes in Brooklyn. Find him on Twitter @mensah4000.