handed me a packet of tissues when I broke
down in the Atlanta airport after signing a lease
on a house we’d never walked through, one filled
with fleas. And somebody’s grandmother
sat next to me on that long flight home, told me
that some things—her sister dying of cancer—
were worth crying over and some were just shitty,
and being grown-up means being able to tell the two apart.
Then she ordered me a ginger ale. And later that day,
I tried to pay it back. I sat next to somebody’s grandmother
on her first flight in twenty years: it is so different now,
she kept saying. I took her elbow, showed her where
the bags would fall out. And it was somebody’s grandmother
that sirens wailed for last night, then went silent at the last
light before the hospital. I used to stand under the helicopters
that cut their way across our corner of Michigan and be glad
that somebody was having a worse day than I, but now I know
that each Medevac was actually a white hummingbird,
deeply engaged in the frantic beating back of death,
and now I wish I could still see them, those little birds
full of somebody’s grandmothers, those races
against the inevitability that awaits us all. 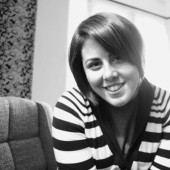 Christina Olson is the author of a book of poems, Before I Came Home Naked. Recent writing has appeared, or is forthcoming, in The Southern Review, River Styx, Gastronomica, RHINO, and Hobart. She is the poetry editor of Midwestern Gothic, and lives both in Georgia and online at http://www.thedrevlow-olsonshow.com/