My childhood was many things. It was a scar of dirt road nestled on five acres; it was fisher-eaten cats, coyotes calling like owls. To feed us, my parents suckled clay soil with sweat until the night-crawlers came. My grandparents helped them buy the land and the little trailer on it so my parents could pay not a landlord but a bank, setting their futures against little slips of notarized paper. Our lives were built on someday.

Summers we sat cross-legged on the deck, processing green beans assembly-line style. Two picked off stem ends, flicking them back to the soil like midges. Two snapped beans into rhythmic sections so neat they’d slide into mason jar mouths. Steam filled our house, made our bodies smell like the plants that nourished us all winter long. In school hallways I sniffed my shirts, hid my beet-stained fingers in the pockets of my homemade cotton shorts.

Years later our situation improved enough to make our garden incidental, but generations of potato farming had bonded our DNA with mycelium, not hydrogen. Still my father turned the clay each spring, pouring into it compost and love until the soil was as soft as our old striped cat.

As an adult the fateful need to push my hands into dirt haunted me until I created a garden of my own, a thing of functional beauty. Nasturtium and marigold sentinels guard its edges with their highlighter blossoms, warding away pests. Tomatoes thread indeterminate fingers through precious basil. Green beans rope up slats of scrap wood and push forth royal purple blooms. Bees buzz meditations as they bathe pollen-plump legs in squash flowers. How strange that what I loathed in childhood is now a sanctuary; how strange the changes wrought by passing years. At eleven, my son has better things to do than forge hangnails with damp dirt but still I wonder if time will work its magic, if perhaps the ancient need for soil and compost is in him as it is in me, lying dormant until the right conditions.

The other day a cat thin enough for dying wandered into our garage. In front of her I slid white dishes of food and water, watched with eyes tuned sharp for any signs of hope. But she could only sniff and wobble, wheeze a breath or two. In the end she pressed her head to the floor for rest, unable to consume the things that once might have saved her. We rushed her to the emergency vet not knowing what we hoped for other than to end her suffering. And that is what we did.

This year the land suffered sporadic bouts of dryness. Weeks passed without water. Each morning I turned my face skyward, sniffing for rain; nights I opened the pipe irrigation, giving sips to thirsty squash and tomato roots, to green beans and hardy turnips. I was careful not to spoil my plants, giving just enough water to keep their sunny blossoms from wilting too soon. Each year I save the surest seeds for planting, so I hoped duress would build strength enough to harden their offspring against inevitable drought.

At last the sky opened and it poured for days, intoxicating my poor parched plants. When the rain was done, I sloshed between raised beds and found everything overtaken by fuzzy gray mold. My plants, water-chilled, had shrugged on blankets against an excess of what had saved them.

Stem by stem I left the living but pulled the dead into buckets for burning. Spores burst forth from mold-crisp leaves and of course I breathed them in. I was glad, not for my spore-filled lungs but for my son’s lack of interest in the dirt that made these long-suffering sprouts. Perhaps it’s best he have no memories like mine of picking green beans, of tasting that first ripe carrot, the trace grind of dirt between his young, unmoored bones. And yet I wonder if someday my son will look out his window at the tortured sky and feel a tug deep in his chest, his DNA saying something he will strain to hear. Louder it will get and there by the window his fingers, now a man’s, will hang by his side, twitching with the same primal need as mine for soil microbes under fingernails. Of all the needs—veins for needles, plants for rain, cats for chase—his will paralyze him because the soil, if it exists at all, will be long dead. And I can’t help but wonder what is kinder: to remain ignorant of a desperate need for the thing that might still save us, or to remember it from long ago and be filled with years of regret.

Photo by Mark Jones, used and adapted under CC. 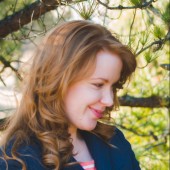 Darcy is a writer, teacher, and editor with recent work in Newfound, CutBank, Yemassee, and elsewhere. She lives and gardens in Maine while attempting to rescue all the furry critters. More can be found at www.darcyleecasey.com.