Songs About Girls with Wheels There are so many songs about women’s legs. Always long, those legs, and made to seem even more so with high heels and short skirts. In the videos, they look straight and smooth and effortlessly strong.

And so many songs about women’s behinds. The contours, the measurements, the shape and the shake of them. The tight jeans that flaunt and flatter them, the tiny bikinis that put them on display.

Candice knows boys at school who make whole playlists like this. Songs about girls in high heels, about guys watching girls walk this way or that, about girls shaking their asses and knowing they will be seen.

No one writes songs about the way Candice walks. In a song, everyone might turn to stare when a girl walks into a room, but it’s not because she’s shuffling in on crutches. There are no songs about guys wishing they could get a look at some girl’s booty, if only she wasn’t sitting in that wheelchair.

Candice’s mom has playlists full of sappy songs about people holding hands. It could work, Candice supposes, if you were sitting still. Like holding hands at a movie, maybe, or hanging out at home, but what kind of song is that? No, the guys in those love songs want to grab a girl’s hand so they can spin her around the dance floor, they want to hold her hand so they can show her off as they walk down the street.

But Candice’s hands are her momentum. They’re how she propels herself forward. If a guy pulled her by the hand out to the dance floor, he might just yank her right out of her chair and onto the floor itself. Or if she was having one of her good days and could manage to walk beside him, to hold his hand she’d have to let go of her crutches. She would have to come to a complete, sudden stop.

Thinking any of these songs might be about someone like her takes a leap of imagination. It’s not just a matter of wishing she could be the girl in the song; it requires picturing herself as a different kind of girl altogether.

Candice has playlists of her own, though. Songs about girls in cars, or about guys who invite girls to climb onto the backs of their motorcycles and get the hell out of town. Songs about wheels. These are the songs that let her dare to feel adventurous, desirable. Unencumbered. Included.

There aren’t enough songs for a whole playlist about girls who have their own wheels. Not many songs about girls in cars picking up boys, or girls who aren’t holding hands with anybody because they’re keeping their hands free to steer. Plenty of songs about some guy giving a ride to a girl, just because he wants to, and can. As if it’s no more complicated than getting hungry and pulling over for a bite to eat.

When she lets herself really think about it, Candice knows this much: those guys couldn’t handle her, anyway. In their sporty little rides, with more horsepower than trunk space, there’d be no room to stash her set of wheels; no place on those Harleys to strap her crutches. Those boys and their toys aren’t equipped to deal with everything that comes along with her.

Her favorite songs, really, are the ones that compare a woman’s body to the car itself. Maybe that’s the girl she could imagine herself to be: polished, hard to handle, built for speed. Hell on wheels. A woman like that, if she’s cruising down the freeway by herself, maybe it’s because no man can catch her. She’s a fast machine, and she doesn’t have time to prance around in heels, waving her booty around in the air. Her hands are on the wheel—two wheels, actually—and her legs, her ass, and the rest of her, just happen to be along for the ride.

Yeah…forget about long legs in short skirts, and butts in painted-on jeans: Candice wants to hear songs about sculpted arms in tank tops. Not the men’s arms that hold women tight, but the capable, powerful arms of a woman herself. Where are the songs about biceps and triceps, about muscles built from striving and struggling to propel a chair uphill, from having to push, push, PUSH against the constant pull of gravity? In the love songs, the boys have shoulders where the girl is supposed to lay her head, but what about a girl’s own shapely shoulders, made trim and firm from having to support her during each and every step she takes?

Those other women, the ones in the songs, with the booties that shake and the legs that strut…do they have to work this hard, not just to move forward, but to keep from falling back? Do they think of their bodies as tools or as toys? Or do they not even have to think this much about them at all? Candice wonders, but she will probably never know.

It doesn’t matter. Those women, their bodies, and the songs about them, have nothing to do with her, really. She is a muscle car merely disguised as a girl. She is sleek, she is streamlined, she is self-propelled and turbo-charged. She will work her bare arms like pistons, preparing to launch, ready to roar.

If those boys in the songs are hungry, they can eat her dust. 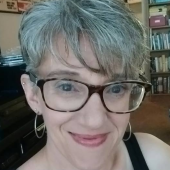 Stacy Estep grew up in the northeast and the midwest before moving south in the nineties. Born with osteogenesis imperfecta (a brittle bone disorder), she developed a love of writing and making things with her hands while recuperating from numerous childhood fractures. In 2014, she was awarded a writing residency at the Vermont Studio Center. She lives in a century-old shotgun house just outside of Atlanta with her artist husband and their cat.