If it’s true that the core of the Milky Way

and if it’s true that every pomegranate

— or maybe 263 but anyway Kelsey says

they all have the same amount —

and if it’s really true that our earlobes

align perfectly with our nipples, as Katie says,

Michael Caine on the set of Batman, struck dumb

upon first sight of Heath Ledger as The Joker.

when I first saw you, across the room

from the beginning,” but that would be untrue.

the night before the Nazis arrived because

citizens with boats rallied to ferry them away

— and why doubt it?  The stars are evidence

then maybe I can believe that astronomers,

if they squinted hard enough, could see

our love and smell it and taste it and chart it

on the stars, which also predict with some certainty

that you’ll never leave me and we’ll 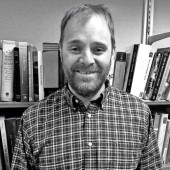