When paramedics rolled the body bag
out the back door at 7:30, they weren’t expecting
to see students. But my boyfriend Rob liked to park

his Taurus in the teacher’s lot, and we’d enter
the building through the back, my sister and I,
to take morning ballet with girls like Ashley,

who called me big-nosed Cassie and danced
competitively. The police tape set the stage,
twisting in mid-air, trying to break free.

We called him Wolfman, the nighttime janitor,
for his white mane streaked black and his beard
that matched. Wolfman had used the pool’s

wheelchair lift, or so my sister says,
to attach the rope to a titan arm that swung
out over the water. But I don’t know

how she knows this or why I picture
Wolfman’s toes leaving ripples in his wake.
The daytime janitor found Wolfman’s note

and searched the building for his body,
believing he could save Wolfman from himself,
but maybe this is myth we’ve peddled as fact also.

Gym class required we swim there, even after;
our throats burning with chlorine, our strokes
uneasy, our kicks cautious in the deep end.

to most everyone, except to us: When Rob
and I’d break for smokes at the backdoor
working tech for Evita afterschool, Wolfman often

joined us. I’d perch on the railing opposite,
feeling slighted while Wolfman and Rob
commiserated about The Man and dipshit kids,

not knowing how to insert myself into
their grown-up conversations. Wolfman’s voice
was gruff, his words dragged like feet

across loose gravel. Back in the dim theatre,
I couldn’t climb the scaffold when sent to tinker
with the rosy lighting gels, my knees betraying me.

During live shows, I’d hiss at Ashley
and the other dancers when they wouldn’t
keep quiet in the wings, and they’d pantomime

my anger before taking stage all smiles.
The spotlight gilded their turnout and toes,
all their lithe lines, whereas I was too thick-

thighed and bubble-butted for grace.
Intermissions at the backdoor, I was listless
and looking across the lot, watching

smoke meet air. But I must’ve stared because
the pyrography of memory singes to touch:
Wolfman’s imposing frame, draped

in his beefy red plaid jacket;
a little bit lumberjack, a little bit
Unabomber. I was never without Rob.

Wolfman didn’t dare talk about the detectives
phoning the day before he died;
we found that out later reading the newspaper—

of assaults over three decades in Windsor,
Chatham, London. He’d wring the air
from women’s necks to keep their bodies still.

The school board wanted parents to rest
assured that Wolfman never had any direct contact
with students, but Ashley was beside herself—

so sure she’d been so close to harm’s way.
I was never without Rob. All those hours
spent backstage behind the scenes, why

would I ever believe I could’ve
been something too bright to look at?
My knees did not betray me. Photo by Nikhil Kesharwani on Unsplash 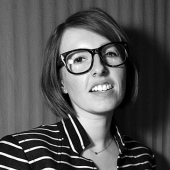 Cassandra Caverhill is a Canadian-American poet and editor. She is the author of the chapbook "Mayflies" (Finishing Line Press) and a winner of the 2021 AWP Intro Journals Award. Her work has recently appeared, or is forthcoming, in Last Resort Literary Review, Reed Magazine, Into the Void, and The Windsor Review. She lives in Ann Arbor, Michigan.