Stein Up: A Review of “Opera Trans Opera”

Stein Up! A Review of Opera Trans Opera In the opening poem of Opera Trans Opera, Mel Coyle and Jenn Marie Nunes instruct their readers to “Stein Up!” Their chapbook fronts a wild “poetic pidgin” of German and English, and so, upon hearing this command, most readers imagine raising a vat-sized glass of beer. However, I took that command as a play on literary homage: Gertrude Stein, whose own libretto for Virgil Thomson’s Four Saints in Three Acts redefined the composition of operatic texts. Historically, a libretto supplies narrative. In Stein’s hands, the text deemphasizes story and instead focuses on language itself—its sonic resonances, tonal variations, and regular pun play. In short, Stein gave Thomson’s opera another layer of music. If a listener were to glean a story, she would need to key in on the repeated motifs and actively construct one. Similarly, Opera Trans Opera­ forces the reader to recalibrate what constitutes language and sense. Coyle and Nunes take classical myths and completely turn them on their heads by collapsing notions of heroism, gender norms, and sexual gratification. Their book may have more explicit rhetorical and political ambitions than Stein, but like Stein, the poems rely on a relentlessly contorting voice.

The chapbook is broken into four distinct sections: “Inter,” “Sexes,” “War Es Notable,” and “Curtaint.” All poems are numbered as opposed to given separate titles; the reader comes to understand each poem as part of a larger poetic project, as opposed to distinct individual entities. All sections have a varied but consistent prosody: the poems are either short, bullet fast couplets with minimal punctuation, or they are longer-lined, period-heavy entities. The latter poem slows the reading process considerably, often requiring the reader to take in every syllable of the book’s poetic pidgin, such as in poem 14, the final poem of the section “Inter”:

und wer of Medusa ist August. Damn her nicht in Guise through

versegendered. after such of Such dem began marching in kund.

If a reader sees this poem alone, it is no doubt a daunting experience. But Coyle and Nunes, over the course of the chapbook, turn this type of poem into a well-earned sense. First off, there are times when the German is actually German: wer­, mit, Himmel (sky or heaven), even Himmelsbogen (which I’m assuming is a pun off Himmelglobus, which approximately means “celestial globe”). The German is either elementary or quite specific, usually in relation to myth. And then there are times when I assume (I know maybe fifty German words) that the German is completely made-up, such as her fort aches in fearlichen. The poetic pleasure here is how the German and English sonically play off each other: “fort” against “fear,” “aches” against “lichen.” Coyle and Nunes play this verbal game so often that English words masquerade as German (zoomeat!). The invested reader understands the poets’ language as more of a tactile and sonic entity, an altered experience where meaning is negotiated, not enforced.

Yet, the alteration of language is not merely a poetic exercise. Rather, the obfuscation of literal sense mirrors Coyle and Nunes’s subversion of gender and classical myth. In the previous example, poem 14, “ere” is not only wedded, but then becomes a “ewe maled.” In another poem, hunter Zeus is “wolffallic.” In poem 48, Jason is not the typical Jason of the Golden Fleece:

No one in this poem is noble. Jason is a hunter of crass sex; his lover is a “verbiage von rotten cunt” (the vowel combinations hammer the disgust). He possesses a “bald wiener,” which he apparently strangles to death. One hears the echoes of Berryman’s sonnets in the final couplet. Throughout the chapbook, sex is often confusing, unpleasant, vile, unrewarding. These representations make complete sense. Coyle and Nunes aren’t here to celebrate the traditional myth; they’re here to critique and modernize it. Conquest is not heroic, but harmful. The previously beautiful are made ugly, their bodies portrayed in crass colloquialism and the harsh heavy sounds of this German/English hybrid.

Yet, the book’s linguistic play keeps the poems away from exercises in pessimism. In fact, the reader hops, skips, and skitters along each phrase and clause, often smiling or laughing at the skilled contortion of language. After all, this chapbook is an opera, a spoken voice within a fractured lyrical mode. The book’s pleasure lies less in its philosophical conceits and more in its ability to linguistically startle. There will no doubt be readers who believe this kind of poetry is an exercise into esoteric gibberish. And that’s a shame, because like Stein, Coyle and Nunes have the uncanny knack for making a reader hear differently. Their operatic voice is distinct both in tone and in pitch, and asks the reader to hear its distorted logics and passions, its constantly shifting registers. It is, at heart, a score of a world whose boundaries are never fixed and whose traditional heroes are flawed and troubled like the rest of us. 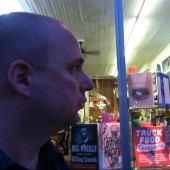