I know: goddamn Orion, every winter night, up there just where you expect him with his club and his shield, always ready to strike but never doing anything.
But don’t go anywhere, don’t pack your bag for Siberia or Wales. You’d have to travel outside the solar system, and very far outside, for constellations to start to look different. Even hitching a ride to Jupiter wouldn’t give you a distinct angle.

The alternative is this: wait 50,000 years. By then, Eta (the star kitty-corner from Kochab in the Little Dipper) will shift so far behind Zeta, the quadrilateral will become a triangle, an upside-down soup spoon. Merak and Phecda on the bottom in the Big Dipper will appear to rise, making the whole ladle flatter, more like a skillet. Orion’s body is made up of supergiants — Bellatrix and Rigel live terrifically far away — so he will stand the same, even after you’ve waited all that time; but he’ll hold his club lower, as if it’s taken him millennia to fake a whap, and his shield will split so he’s holding a divining rod. And look! He’s found Eridanus, the river, right in from of him since the late Bronze Age, though the river will have forked to flow away from him by then. Draco is made up of close stars that will zig and zag a lot, wiggling up the snake. Who knows: Taurus’s lazy eye might wander out, get lazier. Aquarius spills her water; Sagittarius becomes more horse, less human. Libra’s scales tip, Cassiopeia falls out of her chair. Cygnus changes direction and flies off course; Hydra eats her own yummy tail; Gemini’s brothers split up. Pegasus lands.

So hold tight. The view from where you are will change eventually if you can wait long enough.

Or know what you can do? Go to bed. Sleep through the stars and get up in the daytime. The sun moves across the sky, every day. Every single day. One moment the light is sunny and warm and then moments later you need to pull the shades against the cruel glare off the wood floor. The sky is pink then yellow then so blue then white. Shadows get longer and longer. Every second a new vantage. Notice.

In 50,000 years, Vega will be the new North Star; in 200,000 years, the constellations unrecognizably altered. The shapes and the stories up there, the pointers that guide us, all revamped. Anyone, anything, around to name them will use a language you can’t imagine. But don’t wait. Unlike you, Orion can never, in your lifetime, snag that bear he’s after, or kiss, or write a poem or call his mom. 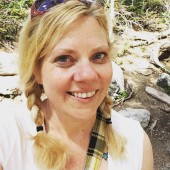