I’m going to tell you about the room where I found my parents after each of them tried to
commit suicide, or more specifically, I’m going to tell you about the marriage bed where I found
my mother dying on the right side and then 23 years later I found my father dying on the left
side.
For the 42 year lifespan of this room, there was the same Federal blue textured carpet on the
floor, Carolina blue paint on the walls, and two Steel blue Thai batiks above the dresser. The old
International Klein blue comforter was on the bed both times I found a parent there.
When I found my mother in that bed, I was 15 years old and my mother was 46. Beside not
liking math, I’m pretty sure I caused my mother to suicide because my breasts were getting too
big. We had been fighting and I left. When I found her, dying, she moaned at me, “Go get your
father!”
When I found my father in his marriage bed, dying, I was 39 years old and my father was 71.
Besides not giving him grandchildren, I’m pretty sure I caused my father to suicide by not
visiting him. But then again, it was a few hours after I told him I was getting on that plane that he
took a knife and slit his wrists. When I asked him, “What happened here?” as he sat at the edge
of his marriage bed, he looked up at me with the one beautiful blue eye that was not blinded by a
cancerous tumor and said, “I was trying to avoid this.”
I’ve had a lot of time to think about all the things I did to cause my mother to take the pills and
my father to slit his wrists. My mother was suicidal during my menarche, and my father was
suicidal during my periomenopause, so I’m assuming it had to do with my fertility.
Some days during my standing what did I do wrong? appointment, I think about that bed in that blue room, that 42 year old marriage bed. I picture my beautiful mother sitting on the edge of her marriage bed, swallowing each of those pills one by one. I picture my beautiful father, cutting his wrists the wrong way: across the vein instead of with it.
What if I would have taken my dogs there? What if I had put blond wigs over their long silky
ears?
“Here Mommy. Here Daddy. I had the babies. A boy and a girl. See how pretty they sit?” 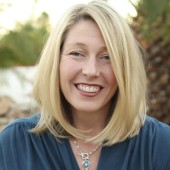 Patricia Colleen Murphy is the founding editor of the literary magazine SUPERSTITION REVIEW and teaches creative writing at Arizona State University. Her poetry collection HEMMING FLAMES (Utah State University Press, 2016) was chosen by Stephen Dunn as the winner of the 2016 May Swenson Poetry Award. It also won the 2017 Milton Kessler Poetry Award. Her work has appeared in many journals including THE IOWA REVIEW, QUARTERLY WEST, THE AMERICAN POETRY REVIEW and most recently in NORTH AMERICAN REVIEW, POETRY NORTHWEST, THIRD COAST, NATURAL BRIDGE, BLACK WARRIOR REVIEW, COPPER NICKEL and others. A chapter of her memoir-in-progress was published as a chapbook by NEW ORLEANS REVIEW.