Sympathy for the Lady Who Misplaced Her Retainer to go pee at nine years old, preferring the allergic reaction to poison

oak that plagued me with blistering scales not unlike purple sunburn,

when middle-aged to the mustached, apple-juice smelling orthodontist,

whose office had lemon wallpaper with images of hot-air balloons

in this blood-fizzing, cotton-mouthed limbo with a Bee Gees soundtrack

about having the thing not unlike squeezed toothpaste happen behind

my zipper as the female assistant fingered my limp tongue and saliva,

cube where I work near the 405 in Irvine because I, too, was born

with an overbite, fitted by latex hands for a fake-gum-and-wire contraption

that chipmunked my face for the duration of my grade-school career.

The female assistant called my retainer Frank the Frankel. Her pamphlet

legs in leotards, no arms, ventriloquizing in a white speech bubble,

given his unremitting rictus. He boasted a chichi past life of adventure

in disguise as a dental agent, spying on diabolical cavities and causes

of gingivitis before turning in his fluoride gun, floss whip and retiring

to my mouth.  I came to trust him—the attractive balance he might grace

my countenance, boy smile. Then, in third grade, I lost Frank. Abandoned

him in the cafeteria with the bok choy nobody ate, leftover corn and milk

on my tray. Mom had let slip Frank was expensive, a half month’s pay,

a grand to be exact.  Suffice it to say I freaked. My crush, the brunette

in the desk behind me jabbed my neck with an eraser, placed a paperclip

across her teeth and said I found him, I found Frank, in gruff baritone

not unlike a sea otter. I cried. I could not focus on penciling in cursive

Mr. Zebra trots over the savanna in the hot summer sun of Tanzania

for the life of me.  I was exiled to the hallway until able to gain control

and penmanship.  The janitor waxing the tile floor took sympathy

on my plight. He dove into a dumpster under the afternoon’s menu

and with the superpower sense of people other people refuse

to see, discovered Frank in a tangle of red-marinara noodles. Mom

gave a crisp Andrew Jackson to the janitor, whose one son my age

had rubber-band braces. We sanitized Frank at the dental office.

I promised the female assistant never ever never again to forget

no cheerleader would ever date. My teeth are basically straight today,

in family photos. And so dear lady suffering uneven teeth and gloom

at losing one more prosthetic hope, know that I will celebrate

your downcast profile with silent gleams of hello when we pass

in different occupations along the well-brushed white hallways

of our cube. Maybe we will meet in the elevator one day and why

not kiss? Between floors I will breathe up your overbite and make out

with mint smiles after a lifelong minute of shared probing, carefree,

yes, until our next checkup. 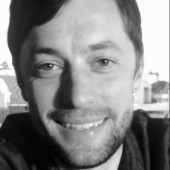 Born in Georgia, Matthew Harrison now lives in Massachusetts, where he's completing an MFA at UMass-Amherst. His writing has recently appeared or will soon in Gargoyle, The Saint Ann's Review, Ping-Pong, Word Riot, Heavy Feather Review, Kitty Snacks, and other journals.