We have a black & white picture: a lewdly smiling

young almost Ronald Reagan in uniform in a Japanese

he’d explain. He’d joined up after his older brother

buried Wayne in France where his hard-scrabble

mother could never afford to visit. “At least that way

I got to see the grave,” Dad said. “They wanted me

to be an officer, but I just wanted to go home.” The war

ended for my father on a ship halfway to the Pacific

Theater. With a belly full of cheap bourbon,

for others’ beer allotment. Once, after a friend passed,

he mentioned how a bunch of them had hopped

a truck to see what Fat Man left of Nagasaki.

“I’m probably the only one left that saw it,” he said. 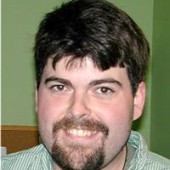 CL Bledsoe is the author of a dozen books, most recently the poetry collection Riceland and the novel Man of Clay. He's been published in hundreds of journals and reads frequently in the mid-Atlantic region. He currently lives in Alexandria, VA with his daughter.