The white-coated doctors and blue-smocked nurses

Gather at four-thirty for afternoon tea

Beyond the ceilings of peeling pipes

The kettles are bestowed on white metal trays;

The colleagues sit on tangerine cushions,

Amidst frowns and thoughts of far-off beaches.

The skies outside are dampness-laden,

The river ebbs a tired gray,

And cars speed on the parallel drive.

The granite-bricked school on an opposite street

Is feeling the throes of daily dismissal;

Nurses gaze outside a window, stir their cups,

Pluck at a tray of raisin scones; their ears

Are out of distance from Lunatics’ Row,

Left to the aides of ox-like strength.

A few cracked minds are left in solitude,

At all hours overturning their cot –

While others manage on six tablets per day.

And all those procedures for keeping in line

The scared faces, the angry, the blank –

The haggard fellow who is afraid of breathing

The middle-aged widow who loves to swallow nails

The handsome devil who stands in one corner

Reasoning with people who aren’t there.

Afternoons set on the human zoo

The shock-tub ripples its straggling current,

A punching bag vaguely sways on its chain.

In the grates’ shadows, far from the clacking china,

The next wave of minds lost – from the streets,

The offices, the factories, the schools.

The ward’s doors are shut and a guard

Sits in his booth, minding the entrance.

Medicine acts with cool indifference, as if

There won’t be an incoming class.

All cups have been emptied, the afternoon shift

For doorknobs in the human hallway. Wind is heard

On an iron latch, pigeons soar above the water towers. 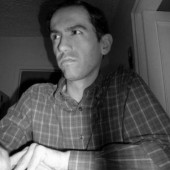 Paul-John is a freelance writer based in Yonkers, New York. His past articles have appeared at Suite101 and Classical Net, while his poetry has appeared in Steam Ticket, Westchester Review, Bumbershoot, and Hobble Creek Review.