After Granddaddy forgot Mom was his daughter, he moved in with us.  He slept in my room and I slept on blankets piled next to my sister’s bed.

Granddaddy had a black Chihuahua named Teeny.  He would make rounds of the house, Teeny cupped in his palm, posed like a tiny sphinx.  Granddaddy would try every door in the house.  These fuckers, he’d say.  These God damned sons of bitches.  Some nights I would wake to the sound of the knob jiggling, look up from my pallet on the floor and see the door bowing as he leaned into it.

One afternoon I was alone sitting on the couch, watching a Tales from the Darkside marathon, when he walked in with Teeny balanced in his palm.  I had the absurd thought Teeny was powering his frail body; without the dog he’d drop to the floor a pile of bones.

He sat on the chaise across the room and declared, calmly and with a sigh of regret: “I’m going to have to kill every motherfucker in this damn place just for a little shit plate of pancakes.”

I listened, quietly, for Mom’s car in the driveway.

He turned the dog in his hand.  It sat as still as a porcelain figurine, facing him.  “Teeny,” he said in a high-pitched voice I had never heard him use.  He touched his nose to the dog’s snout.  A flicker of red tongue from its mouth. “Best dog in the country world,” he said.

On the TV two children screamed as a pair of long yellow arms mapped with blue veins burst through their living room window.  Granddaddy looked up at the sound.  Pushed up his glasses and squinted his eyes.  This drew his mouth into a grin I had always mistaken for a smile when I was younger.  The arms extended across the room, took the children’s parents each by the head and twsited; there were two sharp cracks.  Granddaddy looked at me.  “That’s not right,” he said.

I muted the TV, said, “Would you like some pancakes?”

Just then Mom’s car pulled into the drive.  Teeny leaped from Granddaddy’s hand and ran to the window, barking.  Granddaddy sat with his hand held out in front of him.  Eyes narrowed, he looked from his empty palm to the window to the TV.

Mom’s shadow passed by the window.  He glanced at me, mouth relaxed, eyes open wide.  He sat there, his hand cupped in front of him, as if he were asking for something. 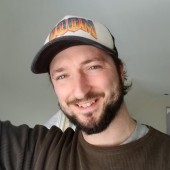 Dominic Stabile lives in Charleston, SC. His horror novella, The Messenger Out of Darkness, is currently under consideration, and the first installment of his Nick Dioli P.I. series titled, Whiskey for Breakfast, is soon to be released. Check his website at dominicstabile.com for updates, and like his facebook page at https://www.facebook.com/dominicstabile1.