Artist’s Statement: When Charles sent Richard the images for ”Ten Bag of Albion,” they reminded him of a longstanding idea he’d had to view the British Romantic poets through a contemporary lens. This was explored by feeding words and themes common in such literature into an online rap lyric generator. His reading of this text was then aggressively manipulated through digital editing: not to create a text where listeners were “told” anything, but to make this language out to be little more than shards of clay pots on an archeological dig. The majority of the images in the film were taken at Dyrham Park in Gloucestershire and Ashton Court Estate in Bristol. The film also features a recording of a television test signal and a one second clip of a bath duck from the film Trash Humpers (2009) by American director Harmony Korine. 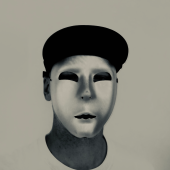 Richard Capener's writing has been featured in Sublunary Editions' subscriptions, Streetcake, Overground Underground, Beir Bua, Spontaneous Poetics, Selcouth Station and Rewilding: An Ecopoetic Anthology, among others. His debut pamphlet is forthcoming from Broken Sleep Books. He also edits The Babel Tower Notice Board, and co-curates the associated Live From Babel Tower reading series and the Babel Parish Radio podcast.

Charles Putschkin (pictured) is a Swedish-Polish maker of visual poetry, sound poetry, and short films. Charles can be found on his website or on twitter.