Bush tore me down the middle of Sweet Lane and I chased him my knees all blooded up calling him Low down.  We sprinted through the peach orchard, my Easter dress raked once by his hands now again by the blooming branches.  I cornered him at Ruin Lake, brown like caramel and Bush’s dark shoulders.

“I’ll bust you up,” I screamed knocking him over as he was getting a leg out his trousers.  “What Mom gonna say about my dress?”

“She’ll call you a clumsy twit for falling all over yourself before church.”

All gums and crooked teeth he was down on the dew-grass the sun glowing him beautiful.  It made me hate him even more for leaving tomorrow for juvie.  Last week he gutted Miss Hinshaw’s poodle with a butterfly knife.  I didn’t see him do it, but that night he came into my bedroom when I was sleeping.  I made space for him thinking he’d get in bed as he sometimes did, but instead he handed over the knife.  It had white tufts of hair stuck to it, the blood sticky like syrup.  He said to hide it, and so I wrapped it in a pair of my underwear and buried it in the back of the drawer.  Didn’t matter though, since Miss Hinshaw was witness to the killing and the police came by next afternoon.  Judge gave him 90 days, starting tomorrow.

From his back, Bush kicked out my legs and I crashed stupidly.  He scrambled into the lake and splashed me.

He took out his noodley penis and peed in the water.  He cranked his shoulders backwards and made the pee arch like a fountain.  I pretended not to look but looked.  Mom was hell-bent on getting Bush’s soul right with the Lord.  She been talking about the Lamb of God all Easter weekend, and talked the pastor into baptizing his sorry butt before he went away.  Now, in only a few hours, Pastor’s going to dip Bush’s head in pee while we all sang Angel Band.

Bush jumped like he’d been bit and he cussed the water.  He scurried out and studied the lake.

“A gi-normous scorpion, I swear it.”

Just as I said it, a thick cloud of gold-flecked mud kicked up and when it cleared, there was the curled-up tail of a huge lobster-looking thing kicking around just under the surface.  It was the size of a dog, not including its horrible red legs and claws.  Its tail whipped and snapped, spraying both our shins.  Then it crawled deeper into the lake until it disappeared in the depths.

My whole body budded with hives.

“Come on Sis.”  Bush was trotting to the old aluminum rowboat upside down in the highgrass. “We’re going to chase that thing.  I want it.  I could win something for having it.”

He flipped the boat and pushed it into the water and got in.  I stood in the grass with my arms folded.

“There’s no way I’m getting in with you.”

“Might be others crawling round in the grass,” he said pushing off.

But He knew contrary.

The sun shone his snapping muscles yanking the oars.  His body looked different in the light, different than it felt in the dark.  I kept my eyes on the thread of his arms because I didn’t dare look into the water.  I repeated Lamb of God in my head.  I thought nothing this bad could happen the day Jesus rose from the dead.

The middle of the lake Bush yelped “Good night” and pulled in the oars.  He was big-eyed looking over the boat, and I couldn’t help but to look too.  The lake around us bubbled and spit, and there was a swelling buzz like a million cicadas just under the water.  This swarm of whatever they were rushed the boat, pecking the sides and belly, the metal pocked like shotgun fire.  Bush was frozen, not even breathing.  I began to pee myself, and bunched the dress between my legs to sponge it.

I scrambled into Bush’s lap.  Pressed my face into his sweaty chest tasting its metallic saltiness, pleading with his body as I had done on the nights he came into the room when he’d hush me, promise me it was good love.  His arms draped me; his heart slammed my temple like God had gotten into him and was punching to get out.  Water coming into the boat licked our ankles.  His heart it thumped fiercer than when he had claimed to love me, and the water was the same cool of the butterfly knife that still lay hid in my drawer.  My heart suddenly sprouted its tail which, seething poison, sought its victim.

I pushed myself from Bush, and lying back on the bottom of the boat, fired both feet smack into the chest.  The loud white of his eyes caught the sun as he fell backwards into the lake.  I sobbed as I watched the electric swarm bubble around him, his arms waving like mad, his screams going from jagged to gurgle.  The peach of his palms were the last things I saw, descending quickly into the dark.  As the lake went once again peaceful, I thrust my torso over the bow and reached for the water, screaming his name. 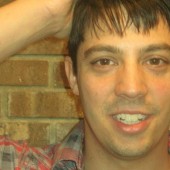 Kevin Catalano's fiction has appeared in PANK, Prick of the Spindle, Emprise Review, Pear Noir!, Metazen, and others. For two consecutive years his stories made the 'Notable' list for StorySouth's Million Writers Award. He was also a finalist in Terrain’s inaugural fiction contest in 2010. Kevin teaches writing at Rutgers-Newark, where he is also pursuing an MFA in fiction. He lives with his wife and daughter in New Jersey.