“The image never goes away.

“I’m unable to see him, but I can feel his hand on my right shoulder. I blanch at the odor of tobacco and booze as he warbles too close to my head. His voice is pregnant with regret, the elegy of ditched hopes and ambition. It has a sour melancholy that even I, as a kid, can taste: that life has somehow run too fast out of his egg timer, and my father’s crying in his beer. Except there is none, so he weeps in sharps and flats.

“At this moment I know that the sperm maker has marked me, and that his melody will haunt me for the rest of my days. I’m marked because he won’t let go; that if only he’d been given another chance, a more understanding woman, or perhaps even a better son than the one he’s crooning behind . . . it’s all in that lachrymose tune I’m recording for eternity. Even in the churchyard, when it’s all dark and the slugs are keeping me company . . . that lament will continue to ring inside my fucking cranium.”

That was Adam’s legacy.

Mine sings of the opposite sex. There were never enough. It’s as if he’d been possessed with discovering one who’d etherize him, cure his lust, open the windows to a stiff breeze, and stem the smoldering in his groin, delivering him from the body of a woman, any woman. Because that’s how he marked me. He breathed her tantalizing scent into my boy nostrils. A bedeviling, addicting odor that fired the mind. He couldn’t give his up—even in death.

I don’t ascribe a malicious intent for his bequeathing the “gnaw” embedded like shrapnel inside him. A niggling wound that never permitted him to forget what he wasn’t . . . or would ever become.

Yet the man’s blood-in-kind detects it soon enough. In Adam’s case by sitting at a battered upright in the apple-green dining room spared of wainscoting. For me it occurred when I undressed my father, who, late one night, had returned home inebriated. I invited him to sleep in my bed. He had been locked out of theirs.

There was woman deep in the crotch and legs of his trousers. She evanesced out of its blue-serge threads. A flower unknown to me, for the person in the room on the other side of our hallway had allowed hers to perish. I only wafted the scent of a sour perspiration and quiet despair when she embraced me. Even when she dressed for Sunday services, her perfume was one of chaste breath instead of hibiscus, magnolia—or ginger.

In his cups that night, Papa watched my eyes light up as if a star had fallen out of the pitchy black and radiated at his groin when I spotted lip blush on his briefs. He took my head in his calloused hands. “Don’t touch it, boy, for it’ll scar you for life!” Only to fall back into the bed, laughing. And when I turned off the light, he slumbered like a tired dog, one that had chased a gnawer through the alleyways or a bitch in heat. He snorted, slobbered, chortled, and, more than twice, threw his arms onto me . . . the whore in his dreams.

All of ten years old, my member scarcely rigid as a school-box crayon. But there was a spark in my nostrils that grassfired into my head. And there aglow stood a naked woman, the best one I would ever draw, pulling me to her torso and whispering, “Whiff, boy. Now go find one for yourself.” As if she’d stuffed a partridge under my nose, I was to race out over our backyard and alongside the creek that cut through it, flushing that bird out of the brush.

From that night I filter all things through that vision.

In every slant of light, she lingers. I dine in her presence. I slumber in her breath. My hands touch surfaces, even the coldest ones, as if they were her thighs, her breasts.

My clothes are impregnated with her complex odors. The taste of the irrigate in her eyes, the salty scale off the soles of her feet, and I reserve the most intoxicating sip of sun-orange lotus at eventide, when I am most alone, when it feels as if this imminent darkness will turn pitchy black forever.

That’s his bequest to me.

Those dense, blue-serge trousers that I flung over my schoolboy chair. They hung there ablaze that night as I tossed and turned alongside the minx tracker who’d carried her home between his legs.

His is a song too.

Like Adam hears throughout his waking hours and beyond.

It is the haunting refrain from these men that never silences. I wander about abandoned cities in my father’s pinstripes. The memory emanating from the trousers lighting my way. Once I lift the two-piece off its hanger and climb into it, I know we are going hunting. The garment causes me to adapt an engaging smile, affect a charm that I don’t come to naturally. It’s as if the suit possesses its own will, that it contains the memories of just where to go, what taverns and roadhouses to enter, where I might best make an assignation.

He resides in it, that’s why.

Put it on, boy. We’re going dancing, you and me. See how it works for you.

So I do and begin to feel like somebody else. The failure that I carry around inside me. The one who has found a way to beat death. He who could never get enough. The sirens lifting him out of the grave. And together the marker and I are on the scent. 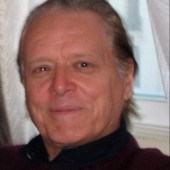 Dennis Must is the author of two short story collections: Oh, Don't Ask Why (Red Hen Press, Los Angeles, CA, 2007) and Banjo Grease (Creative Arts Book Company, Berkeley, CA, 2000), plus a forthcoming novel, The World's Smallest Bible, to be published by Red Hen Press. His plays have been performed Off Off Broadway and his fiction has appeared in numerous anthologies and literary reviews. He resides with his wife in Salem, Massachusetts. For more information, visit him at www.dennismust.com.