He came in through the window like he always did. He’d texted me a few hours earlier with his usual message—up for the good stuff? Other boys were more crass when they texted girls about sex. Plowing. Hitting it. They were angry, violent, sometimes humiliating. My friends had sex with them anyway. I was glad that Nikki was nicer.

I’d been hoping he would come by tonight, ever since I saw the blurry picture that looked like him all over the internet. I knew it wasn’t really him him—Nikki never wore a baseball cap and the guy stood in a non-Nikki posture. Still, I liked to play with the idea that it was him. It gave me a jolt. There’s never any drama around here other than the occasional kid getting busted for selling pot, so the thought that this boy I hooked up with could be the bomber, the terrorist that everyone was looking for, was amazing.

I was almost asleep when he came in, and my bed was warm like a nest. He stood beside me and lifted his shirt over his head. I took in the sight of his lean torso, his jeans low, hip bones jutting out over his shorts. He dropped his jeans and his boxers to the floor and slid in beside me. We wrapped ourselves around each other like we always did—my leg over his hip, his head tucked beneath my chin. His skin was smooth and cold, like marble. He lifted his head and kissed me, more softly than was normal for the non-boyfriend-girlfriend thing. He did a lot of little things that broke those rules—staying after sex to snuggle, running his finger along my face. He was born in another country, and even though he didn’t have an accent, I sometimes wondered if that made him a little bit less American. Old fashioned.

My dad would have freaked if he ever caught us—Nikki and his family were Muslim and my dad hated that. They lived in this neighborhood where a lot of Muslim families lived, and my dad always said something shitty whenever we drove through. My dad even met Nikki one time when he picked me up after school and he asked me later if he was one of those “fucking jihad shits.” I told my dad he was an idiot.

Under the covers Nikki shuddered a little and I pulled him closer to me so he could get warm. He wasn’t in any hurry to have sex. He was happy just to be in my bed.

“I’ve been out all night,” he whispered.

I nodded. Usually that meant he was with his boys partying out behind the garage where he worked after school. When boys had been partying, there was no telling how they’d act. Sometimes they just fell asleep. But I didn’t taste reefer on his breath, or beer either. His mouth just tasted like him.

Soon he untangled himself and climbed on top of me. A long hunk of hair fell into his eye. He wasn’t that great at sex, but who was? He pushed inside me and started his rhythmic pumping. I was still half asleep, so it was a little bit of an effort to act excited. I moaned some, moved my hips against his. But it was nice anyway, his smooth skin under my hands, the smell of his unwashed hair weirdly appealing. I let my hands wander under his hips, the hard bones so sexy, animal haunches.

And then I thought of the picture. What if it really was him? He was on the run and stopping to be with me was the last free thing he would ever do. This got me excited. I pull him into me and pretended we were in love. He’d done this horrible thing. He would have had a good reason, though, but no one would ever understand or care. Nikki was a good person. You don’t have sex with someone for almost a year without an understanding of who they really are.

There was nothing urgent about the way he was having sex with me. It was just like always. But still. Maybe his last wish before he took off into the night was to be normal, to be inside of me, so sweet. To pretend his life would stay the same.

I opened my eyes and saw the graceful arc of his shoulder moving over me. My eyes filled with tears. If it was him, it was only a matter of time before they caught him. I thought about what they’d do to someone who had blown up half a city block, killed people, maimed people. I just knew it would be awful. He’d be killed, if not right away then later, after a trial.

Now the tears ran down the sides of my face, soaking my pillow. I hoped he wouldn’t notice because I had no way to explain it, but luckily he just kept pumping, oblivious. I loved the way he felt, even if it was boring sex. Even though he wasn’t my boyfriend, he was still mine. He finished finally and rolled off me. He turned his head and smiled.

Two days later, the picture from his arrest was all over the internet. It was blurry, but there was Nikki lying on the grass, bleeding from his neck. There were cops all around him. His shirt was pulled up and his jeans were unbuttoned, showing his boxers. The same boxers that had been on my bedroom floor. I could see his belly, caved in as though from hunger, and those beautiful hips exposed for all the world to see. 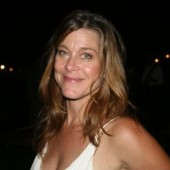 Julie Odell holds an MA from the Center for Writers at the University of Southern Mississippi. She has published short stories in the Berkeley Fiction Review, the Crab Creek Review, and Five Chapters. In addition, she was a 2004 MacDowell Colony fellow and has recorded personal commentary for National Public Radio.