The wobbly cart was my undoing. I had gone to a temp agency after several months of sending out resumes from a basement apartment that smelled of mold. The apartment had flooded shortly before my wife and I moved in. Though they had ripped up the carpet and tiled the floor, the sodden carpet smell lingered. The place retained a dewy sheen, like a bathroom after a long shower.

At the temp agency, after failing the typing test, I was told there was an opening at the loading dock at Children’s Hospital. The next day I reported for duty.

From the bowels of the hospital I would stack boxes onto my cart, arrange them according to a rough geography of the hospital’s serpentine floors and wings, and make my deliveries. I would return to the loading dock as many times as necessary to clear out the day’s inventory.

The cart was made of stainless steel, about eight feet long, with a chest-high handle on one end. Like a shopping cart there always seemed to be one wheel that would, at inopportune times, skitter wildly in its caster. I’d be steering calmly down the brightly lit corridors, as nurses in white sneakers scuttled past, and the cart would turn on me and strike the wall with a metallic screech.

The nurses would stutter-step for a moment, their mouths opening slightly as if to speak, before stiffening and continuing past. I’d sigh and wrench the cart from the wall. I still remember the look in their eyes.  It was not annoyance or bemusement—happens to the best of us—but a look of veiled sadness. The kind of glance my father would get, years later, when he was out in public and spittle chinned with dementia.

As I made my rounds, day after day, I began to notice the marks on the walls. Faint streaks, permanent reminders of long-ago collisions, the spoor of those who had come before me.

One day I was alone in the elevator, on my way up. I had just come from the loading dock and my cart was stacked high with cardboard boxes. As I ascended, the elevator came to a stop and the doors slid open. Four doctors in white lab coats were standing around, waiting to get on. They glanced at me and their eyes took in the cart. At most, two people could fit, but they’d have to edge their way in and stand upright against the side railing. We stared at one another, long enough for the doors to start closing.

One of the doctors, the youngest among the four, put his hand against the moving door and forced it back open.

“Out,” he said, with an accompanying jerk of his head. His eyes were red-rimmed and tired.

There was no gurney beside them, no patient lying prostrate on a table, no vibrating beepers at their hips. Just four guys waiting for an elevator.

Realizing what he had set in motion, he said firmly, “I said get out. Don’t you understand English?”

I thought of my apartment and its sweating walls, the small window and the patch of sky beyond. I thought of my wife in her office, and the growing fissure between our lives.

As I worked the cart back and forth, angling it out, I bumped the side wall and a box tumbled to the floor.

They got on, the doors closed, and I waited my turn. 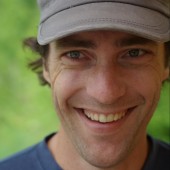 Tom O'Rourke lives in Duluth, MN with his wife and two sons. He is working towards--and someday might finish--his MFA in creative non-fiction at Chatham University. He has a writing shack in the woods that both Thoreau and Ted Kaczynski would envy.