When I was five, I would sit on the balcony of the fourth-floor apartment that my parents had chosen for us in the suburbs of Jeddah, or I would lean against the railings, daring the heat of the afternoon sun. The desert smelled salty. It may have been the stench of the sweating people in the unusually humid part of Saudi Arabia where we lived. You would be surprised by how far the stench of sweat travels.

Across the street was what I assumed was a middle school because the students there were almost twice my height. Not a bit of noise escaped the tall concrete walls around the compound. Where one of the buildings inside was higher than the walls, I could see the upper half of the windows, grilled and covered. I was always suspicious that someone in there could see me, even though I could not see them. A green board on the wall had something written on it in Arabic, which I could not read.

At three o’clock, a bell would ring and reverberate across the blocks around the school. A tall metallic door facing our apartment would open, releasing a throng of excited children clad in dark green uniforms, chattering and shouting in unfamiliar tongues. Minutes after they were outside, their faces glistened in the sun with perspiration. They huddled under the shadow of the wall or the lone tree on the block, waiting for their turn to buy french fries from the carts that appeared by the road around the time of the school bell, pushed by skinny men in kurtas.

I waited on the balcony until the last one of them had disappeared, on foot, confabulating with their friends until they reached their homes.

They looked the color of the people whom, for some reason, I had always imagined living in the desert, the ones who kept their heads uncovered under the sun. The dark outsiders. I would ask my mother why I did not go to the same school as them, why I had to travel an hour on a bus packed tight with children, with the desert air blowing on my face. “We do not associate with those people,” she would say. “You go to a school with better, more well-behaved children.”

The children I went to school with were also children of immigrants, but the colors of their skin were fairer on average than the children I saw from the balcony. That was the only difference I could observe.

I would watch my mother slip a purdah over her clothes as she went out to run errands. It was almost forbidden for women to go out by themselves. She went anyway, to gossip with the neighbors or to the bazaars selling an assortment of things imported from our homeland, India: a million flavors of fermented mangoes, ripe mangoes, DVDs of Indian films, spices, coconut water, and an uncountable array of merchandise packed tight into a labyrinth of shelves. However, every time she put on her veil, she would tell me under her breath, “It’s a curse that we have to live in this place. But it’s just that your father makes good money.”

One afternoon, when my school bus left me at the steps of the apartment building, my mother, who had not returned home from one of her trips, did not come let me in. I stood there perplexed. The ornate gold-embossed door to the building was as tall as the ceiling. I knew it took my mother a lot of time to finish her conversations or purchases. The heat outside was debilitating. I started quietly weeping, my back turned against the children flooding into the street now that their bell dismissed them. Even with all the effort to hide my distress, two girls knew that I was crying. They skipped over to me, smiling, too young to wear a purdah. They probably asked me what was wrong, and as I somehow conveyed that I was locked out, they started kicking the door, as if punishing it for stalling me. They shouted and slammed against the door until someone came to let me in and shooed them away for making a ruckus. They looked back and smiled at me as they ran away. I walked up the stairs and waited by the apartment door for my mother to return. For the first time in my life, I knew she was wrong.

Photo by Francisco Anzola, used and adapted under CC. 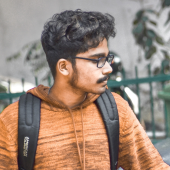